In the technical shop at the Museum of Natural History in Halifax, a stone column is being prepared for shipping.

But this is no ordinary column. It’s a fossilized tree stump.

The stump is from a tree from 300 million years ago. It was part of a tropical forest south of the equator at the heart of the supercontinent Pangea.

“Trees at this time had quite a bit of hollow space, their vascular structure was around the bark area, and the inside was very loose,” said Tim Fedak, curator of geology at the Nova Scotia Museum. “So as fossils they formed because sand filled in the inside of the tree.”

Over millions of years, the tree moved thousands of kilometres, as Nova Scotia drifted northward. The fossil was discovered in the cliffs at Joggins. Tim Fedak is the curator of geology at the Nova Scotia Museum. (Moira Donovan/CBC)

Now, it’s about to be moved again, to join other fossils from across Canada in a new “Dawn of Life” gallery at the Royal Ontario Museum.

“It’s a really important exhibit that’s opening at ROM,” said Fedak. “And this becomes a beacon to bring people’s awareness and attention … to Nova Scotia.”

Making sure the tree arrives at the ROM in one piece is “almost an art form,” said Fedak.

“You can’t just put it in a box and and wrap it in Styrofoam,” he said.

When an object like this needs to be moved, a crate is built specifically for the purpose. Senior preparator Corey Mullins said the process has two guiding philosophies.

A silicon rubber mould of the tree. (Moira Donovan/CBC)

When the fossil is ready to be shipped, it will be wrapped in a waterproof membrane and put into a crate equipped with a set of inner ribs. Then it will be sent to Ontario with a shipper specializing in moving museum goods.

Construction on the new gallery is set to start this year and is due to open in 2021.

But while the stump is at the ROM, it’ll still have a presence in Nova Scotia.

The museum has made highly-detailed moulds of the stump from silicon rubber. Casts from these moulds can be sent back to Joggins, to other museums or used in exhibits like augmented-reality displays or dioramas that show what the inside of one of these trees would have looked like. 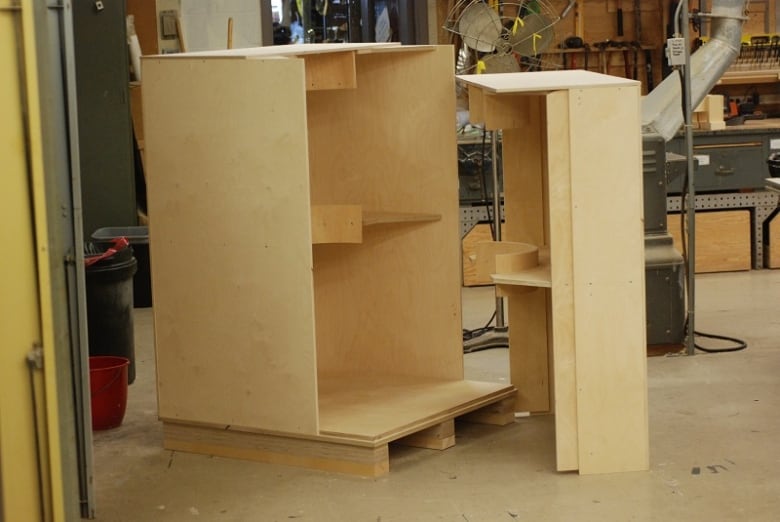 The tree will travel to Ontario is this wooden crate. (Moira Donovan/CBC)

“It’s actually the inside of these trees that’s the most spectacular thing about Joggins and the reason Joggins is what it is today, said Fedak.

“Because in the mid-1800’s, paleontologists William Dawson and Charles Lyell were walking along the beach at Joggins and they found the bones of early reptiles inside the stumps of these trees … so historically the site’s been really important for those bones.”

For more than a hundred years, these Lepidodendron trees have been helping people understand the Carboniferous period.

Now, Fedak said this fossil will spread that knowledge to more than a million visitors to the ROM a year.

“The stump will eventually come back to Nova Scotia,” said Fedak. “But while it’s there, it represents Nova Scotia to a really high level, and it speaks back to a history that goes back to 1850 — the dawn of paleontology science and geology.”

This stump will also be representing a more recent legacy, Fedak said — that of Don Reid, the man who found it.

Reid died in 2016. In his life, he was named “the keeper of the cliffs” and recognized with the Order of Nova Scotia for having played an essential part in the designation of the Joggins fossil cliffs as a UNESCO World Heritage site.

John Calder, Reid’s longtime friend, said walking the cliffs was a daily ritual for Reid. Through a lifetime of careful collecting, he amassed a huge collection of fossils, which he bequeathed to the fossil centre.

“And it became, and it still is, the heart of the collection of the World Heritage site,” he said.

The fossilized stump was prized part of that collection.

Calder says Reid would be delighted to know that it’ll now form part of a gallery aimed at teaching even more people about the dawn of life.

“He just had this incredible love for the fossils of the cliffs, and he really wanted to share his love of the fossils and his fascination with them with other people,” Calder said.

“And so the idea of this fossil emissary going to the ROM to speak for Joggins and … this whole time period of Earth history — he would be thrilled.”

Post Views: 1,637
Want To Change Your Life? Start Earning Up To $5,000 Per Week After Watching This Video. Click Here!
Related Topics:carefullymillionyearoldshipstumptree
Up Next

Post Views: 699
Want To Change Your Life? Start Earning Up To $5,000 Per Week After Watching This Video. Click Here!
Continue Reading

Post Views: 4,608
Want To Change Your Life? Start Earning Up To $5,000 Per Week After Watching This Video. Click Here!
Continue Reading

Post Views: 434
Want To Change Your Life? Start Earning Up To $5,000 Per Week After Watching This Video. Click Here!
Continue Reading