Toronto’s Design Review Panel met for their first session of 2019 last week, easing back into things with a short meeting to review only one project, albeit one that elicited many compliments from Panelists. The project in question is 861 St. Clair West, a 9-storey condo building proposed for the southwest corner of St. Clair and Winona Drive that was submitted for Site Plan Application (SPA) last year. Headed by The Benvenuto Group and designed by StudioAC with Ventin Group as project architects, the new mid-rise offers a unique form within a quickly densifying neighbourhood along St. Clair West. 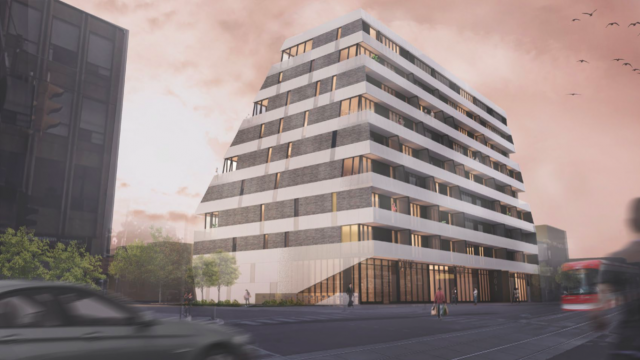 The building is notable for its angled facades and material expression, composed of alternating lines of perforated aluminum panels and precast grey brick. The massing follows the zoning almost exactly, adhering to the angular plane and stepback requirements of the City’s Avenue Study. Rather than being seen as a constraint or hindrance in the design process, the zoning criteria became a driving force in the design of the building. 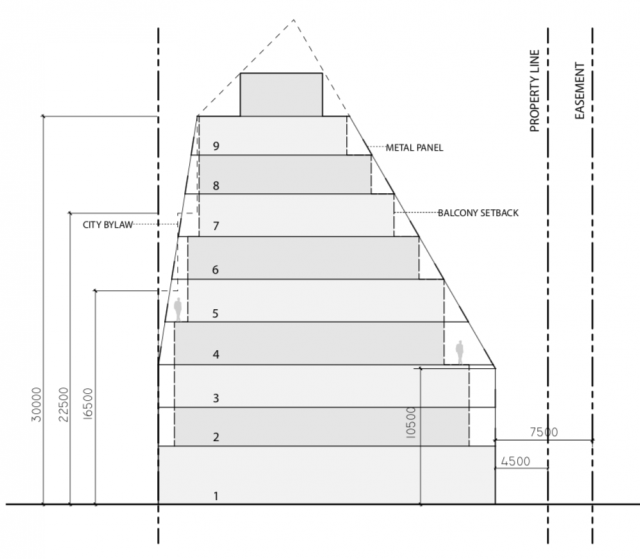 In the words of the architect, “the demand for balconies in the city has caused balconies to become the defining architecture of many buildings…we embraced this, and allowed it to determine the massing and architecture of the building.” This is apparent through the expressed metal balcony railings, which continuously wrap around the building with a consistent material of perforated aluminum. The railings are also angled to mimic the zoning envelope, helping to define the overall form of the building. 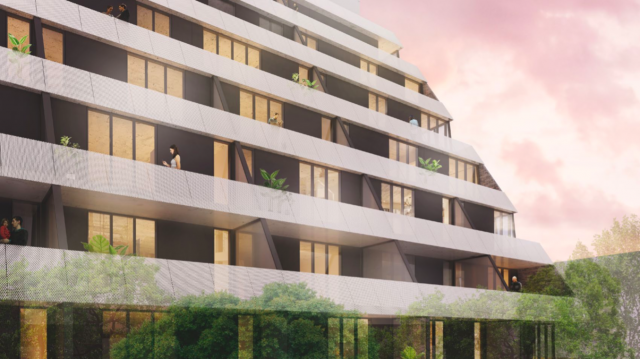 Rendering of the south elevation, image courtesy of the Benvenuto Group.

The mid-rise will contain 80 condo units, with a mix of 42% one-bedrooms, 57% two-bedrooms, and 1% three-bedrooms. Three retail units will be located on the ground floor facing onto St. Clair, with one wrapping around the east elevation to have a second face onto Winona. A landscaped patio space is envisioned on the east facade along Winona to service the corner retail unit. 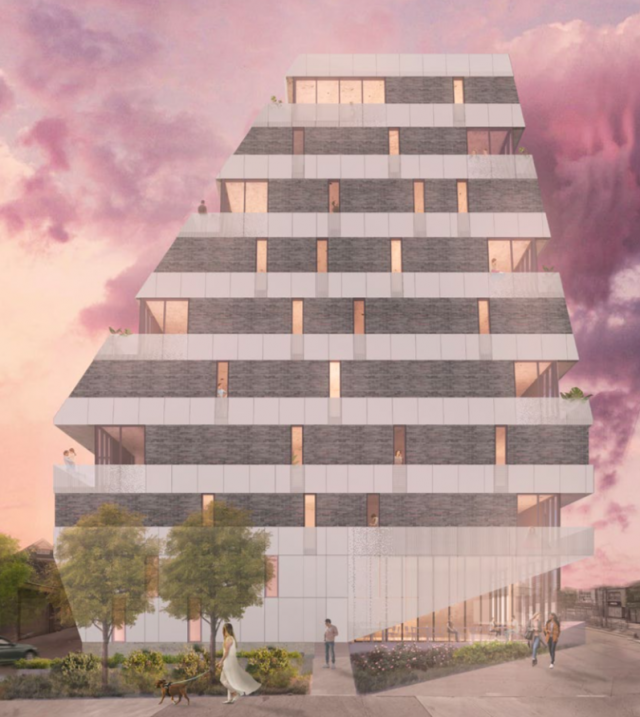 Rendering of the east elevation, image courtesy of the Benvenuto Group.

The Panel had some encouraging comments for the design team, but also offered some suggestions and words of caution. Calling it a “courageous and encouraging departure from what we’re used to seeing in these mid-rise forms”, Panel members remarked that it was a “very interesting project” and a “wonderful start”, and “appreciated the approach and enthusiasm with the project”. They did, however, caution that the design was only partway there.

Panelists commented that the building was halfway between a sculptural object and a standard mid-rise, but it was clear that the design team wished to trend more toward an object with its unique handling of the form. They offered suggestions to improve the design, recommending that more attention be paid to the articulation of the east and west facades. They also encouraged the designers to work with the play between “singularity and multiplicity” to add more variance into the currently monolithic design, referencing Kings Landing – Arthur Erickson’s waterfront condo development – as a precedent. 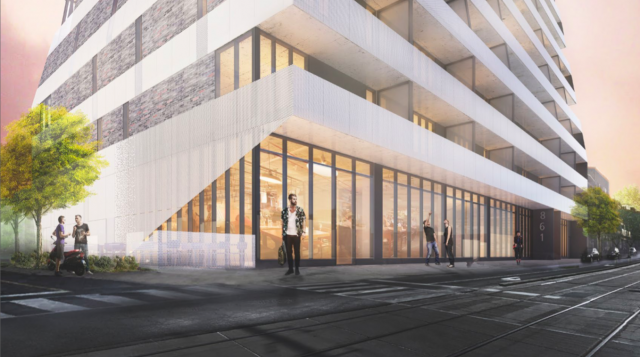 Rendering of the northeast corner, image courtesy of the Benvenuto Group.

The Panel’s main concern with the project regarded the zoning envelope. They pointed to two areas where it potentially infringes on the requirements: at the rear south elevation, where it is unclear if it is a private driveway or a public laneway to the south (which would change the setback requirements), and at the west elevation, where the lack of a stepback at the fifth floor could potentially render the land to the west undevelopable. The City indicated that the wording of the zoning by-laws left much to interpretation and that they were working with the developer to determine the appropriateness of the proposal.

This zoning discrepancy could be a major speed bump for this project: it is currently submitted for SPA because it seemingly fits within the zoning, but if it is determined that it does not adhere to current zoning regulations, it will either need to be redesigned, or it will need to be submitted for rezoning first before being approved for SPA. 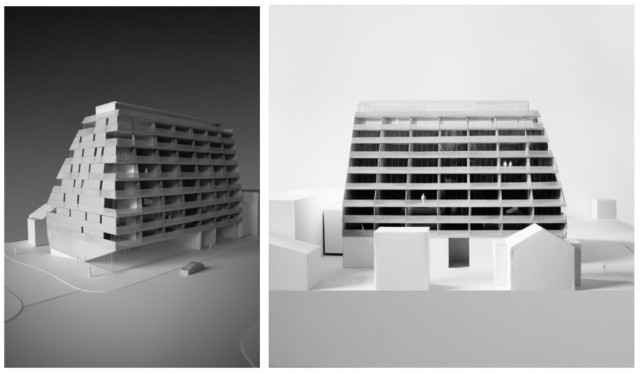 Photographs of building model, image courtesy of the Benvenuto Group.

Overall, the Panel was pleased and encouraged with the design presented, and voted unanimously in support of the project. They did, however, caution both the design team and the City that the zoning needed to be ironed out before the project proceeded.

861 St. Clair West joins a slew of proposals in the immediate vicinity that will create a node of mid-rise density along St. Clair. To the east, the 10-storey Nest Condos were recently completed, while to the northeast, Eight Forty on St. Clair will rise 8 storeys. To the northwest, two 12-storey condo mid-rises are proposed on either side of Oakwood Avenue at 898-900 St. Clair West and 908 St. Clair West. If all of these are approved, this stretch of St. Clair could be completely transformed in the next five years. 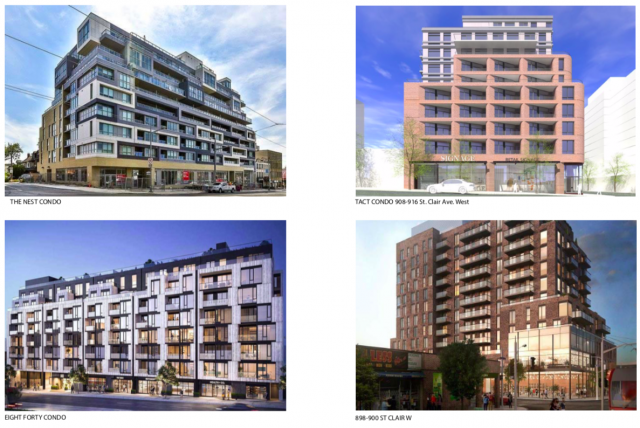 Images of mid-rise projects in the immediate vicinity, image courtesy of the Benvenuto Group.

We will keep you posted as this development continues working its way through the planning process, but in the meantime, you can tell us what you think by checking out the associated Forum thread or by leaving a comment in the space provided on this page.

Post Views: 1,995
Want To Change Your Life? Start Earning Up To $5,000 Per Week After Watching This Video. Click Here!
Related Topics:ClairdesignpanelproposedreviewStweighswest
Up Next