Haida Gwaii’s population of northern goshawks are the last remnant of a highly distinct genetic cluster of the birds, a new study by University of British Columbia researchers has found.

Researchers estimate the population of birds may have been evolving separately on Haida Gwaii for 20,000 years — right around the last time the glaciers melted, causing the sea levels to rise and potentially separating the birds from their kin.

While the birds can fly long distances — with goshawks from Michigan and Manitoba travelling as far away as the central United States — they don’t seem to like travelling over water, which could account for their long-term isolation, said study co-lead Armando Geraldes.

“There don’t seem to be strong geographic barriers anywhere on the continent but then you get that body of water — about 70 kilometres of water between Haida Gwaii and the mainland — and that is apparently is enough to isolate that population,” he said. 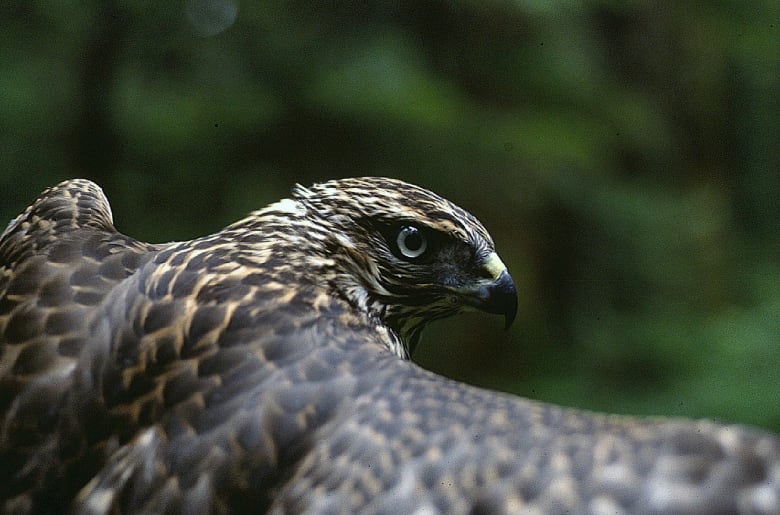 Only 50 of the raptors are left on the archipelago.

Their darker colour is a pattern that’s seen in a number of different birds in more humid environments, said the paper’s senior author, Darren Irwin.

“There are a number of theories why that is but we are not really sure why,” he said. “It is a bit of a mystery.”

Geraldes said the goshawks are not only different in the way they look, their genome is quite distinct too.

Irwin said scientists think that the group of goshawks found in Haida Gwaii is genetically adapted to the forest environment where they live.

“The darkness and other traits that we don’t know about … that enables them to live well in that forest.”

Adults are grey and white in colour with golden talons, Irwin said, adding that juveniles are brownish. 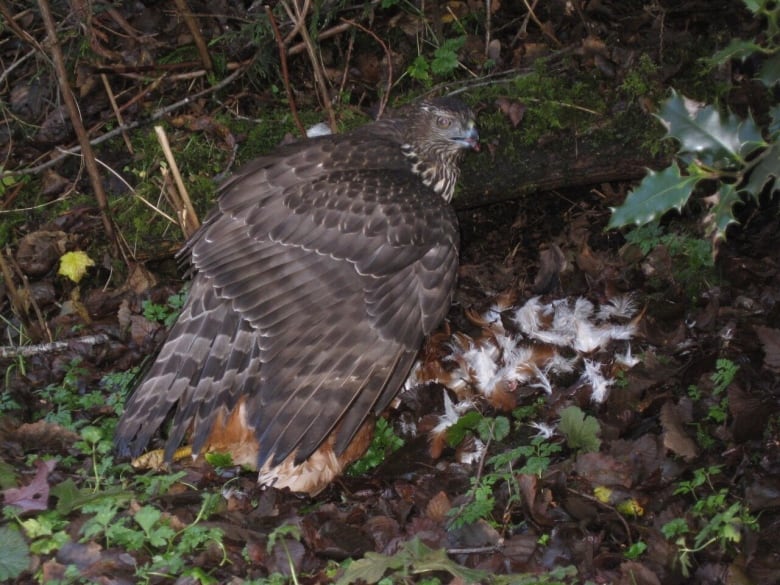 A northern goshawk is shown feeding on a chicken in this undated handout photo. A new study by UBC researchers has found that Haida Gwaii’s population of northern goshawks are the last remnant of a highly distinct genetic cluster of the birds. (Caitlin Blewett/The Canadian Press)

They have a strong beak and feed on small mammals and birds, he said.

“They are very good fliers, very fast and very agile and they flash through the forest … turning this way and that way,” Irwin said. “They are used a lot by falconers. They are very charismatic birds.”

Right now Geraldes said goshawks are fighting for space. They nest in large, old-growth forests so one of the concerns is loss of habitat from logging, he said.

Goshawks hunt chickens and sometimes get caught in wire fencing while at other times they are killed intentionally, he said.

With its small population size, the genomically distinct Haida Gwaii population can be considered to be one of the most endangered organisms on the planet, the study said.

These animals fill an important ecological role as a top predator, Irwin said, adding that their health reflects the health of the forest.

While the population in the archipelago is distinct, these birds are in decline everywhere, and are listed as threatened. Geraldes said it is important to save the animals to preserve the genetic variability.

“Because once you lose it, you’ll never regain it,” he said. “Imagine if there’s a very bad winter and they don’t survive.”

Irwin said maybe someday other goshawks will get to the islands, but evidence suggests new arrivals may not fare as well as the longtime residents.

“To get something as well adapted as they are might take that long again,” he said. “So we think it’s wise to keep the ones that are there in a healthy state.”

Post Views: 484
Want To Change Your Life? Start Earning Up To $5,000 Per Week After Watching This Video. Click Here!
Related Topics:distinctgoshawksGwaiiHaidaHomeNorthernpocketvulnerable
Up Next

Post Views: 3,575
Want To Change Your Life? Start Earning Up To $5,000 Per Week After Watching This Video. Click Here!
Continue Reading