Two of Canada’s largest mobile phone services are being targeted by a social media campaign launched by Remind.com, a San Francisco-based company that provides a free two-way texting service for teachers, students and parents.

Remind is calling on its Canadian users — nearly one million individuals, according to the company — to pressure Rogers and Bell to reverse a recent price increase that makes Remind’s texting service uneconomic in this country.

“Beginning on Jan. 28, parents and students in Canadian classes who normally get Remind texts will no longer receive messages if they have wireless plans with Rogers, Bell, or their respective subsidiaries,” the company says.

It goes on to ask users to reach out to Bell and Rogers through social media to ask them to reverse the fee.

The free version of Remind’s app has a variety of uses including notifying groups about class assignments, schedules or emergencies, as well as two-way communications between individual teachers, students and parents.

Rogers and Bell say they don’t have a direct contractual relationship with Remind — which accesses their networks indirectly through two intermediary companies — but they are willing to discuss a compromise.

“We know how important it is for educators and parents to stay connected,” Rogers spokeswoman Sarah Schmidt said in an email statement.

“Last year we reached out and made every effort to work out a more than fair agreement with them that would have met their SMS needs on our network. Unfortunately, they were not satisfied.”

Bell spokesman Nathan Gibson said in an email that Bell doesn’t directly charge either its own customers or Remind to send or receive text messages on their mobile phones.

But Bell did begin to charge an intermediary company, called Syniverse, a “very nominal fee” for each message delivered over its network as of Dec. 1 in response to a higher volume of spam text messages.

“We were contacted by Remind for the first time last week about the increased costs they’re facing. We are talking to them and Syniverse about what can be done to address their concerns.”

Syniverse is an intermediary that bridges the gap between the world’s wireless communications networks. In this case, it has relationships with Bell, Rogers and Twilio, another intermediary used by Remind.

None of the companies’ representatives would disclose the per-message fees involved. 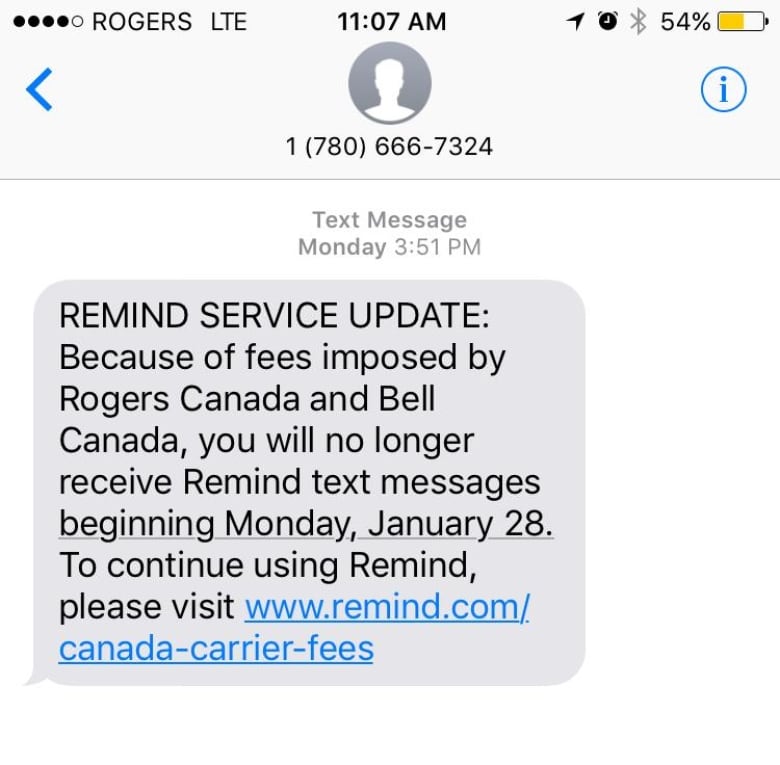 Remind has been advising its Canadian users that the service will soon no longer work in Canada. (CBC)

Grey said Remind doesn’t use its platform as a method for distributing advertising and its revenue comes from the sale of a large-scale version of the service to schools and districts, a practice launched in January 2017 in the United States.

“Longer term, our plan would be to bring that to Canada and other markets. But we’re just not there yet,” Grey said.

In the meantime, Remind’s strategy in Canada is to provide a free version of its service to teachers who then spread the word to students, parents and eventually school administrators.

“That’s why this move by Rogers and Bell also is problematic. Basically, it comes at a time when all we are providing to Canada — educators, students and parents — is a free version of our service.”

“Our business model is really about building more benefits and features into our communications platform that then allow us to sell a paid version … that connects to what are called school information systems,” Grey said.

Grey said he’s looking for alternative methods for Remind to reach users in Canada but said it would be better to stay with Bell and Rogers, given the number of teachers, students and parents who use their service.

Post Views: 419
Want To Change Your Life? Start Earning Up To $5,000 Per Week After Watching This Video. Click Here!
Related Topics:BellchargedcomplainsfeesRogersSchoolsserviceTexting
Up Next