An official Chinese newspaper warned Washington not to demand too much from Beijing as talks on ending their tariff war entered a second day Tuesday with no word on possible progress.

The Trump administration is dealing with an increasingly strong China that has its own pressing needs, said the Global Times, which is published by the ruling Communist Party. It said Washington “cannot push China too far” and must avoid a situation that “spins out of control.”

Negotiators began talks Monday on a fight over Beijing’s technology development tactics that companies worry might hobble global economic growth, but there was no sign either side has changed its stance.

U.S. Presidents Donald Trump launched the trade war in July by hiking tariffs on Chinese goods in response to complaints Beijing steals or pressures companies to hand over technology.

He and Chinese President Xi Jinping agreed Dec. 1 to postpone more tariff hikes on each other’s goods for 90 days while they negotiate. But economists say that is too little time to resolve issues that have disrupted U.S.-Chinese relations for years.

Washington is pressing Beijing for changes including rolling back plans for government-led creation of Chinese global champions in robotics and other fields. Europe, Japan and other trading partners have echoed Washington’s complaints that those violate Beijing’s market-opening obligations.

Chinese officials have suggested Beijing might alter its industrial plans but they reject pressure to abandon a strategy seen by communist leaders as a path to prosperity and greater global influence. They have tried to defuse pressure for more sweeping change by offering trade concessions including purchasing more American soybeans, natural gas and other exports.

“China would need to significantly recalibrate its industrial policies to fully meet the U.S. trade team’s demands,” Nick Marro of the Economist Intelligence Unit said in a report. “The limited policy movement that we’ve seen so far suggests that a game-changing deal remains unlikely.”

As the talks began Monday at the Chinese Commerce Ministry, Beijing complained about a U.S. warship in what it said were Chinese waters, but it was unclear whether that would disrupt the proceedings. Both sides have provided scant information about their discussions.

The talks went ahead despite tensions over the arrest of a Chinese tech executive in Canada on U.S. charges related to possible violations of trade sanctions against Iran.

Trump imposed tariff increases of up to 25 per cent on $250 billion US of Chinese imports. China responded by imposing penalties on $110 billion of American goods, slowing customs clearance for U.S. companies and suspending issuing licenses in finance and other businesses.

The Global Times said China’s growing economy means it can “carry out a more intense boycott” of trade with the United States if needed. 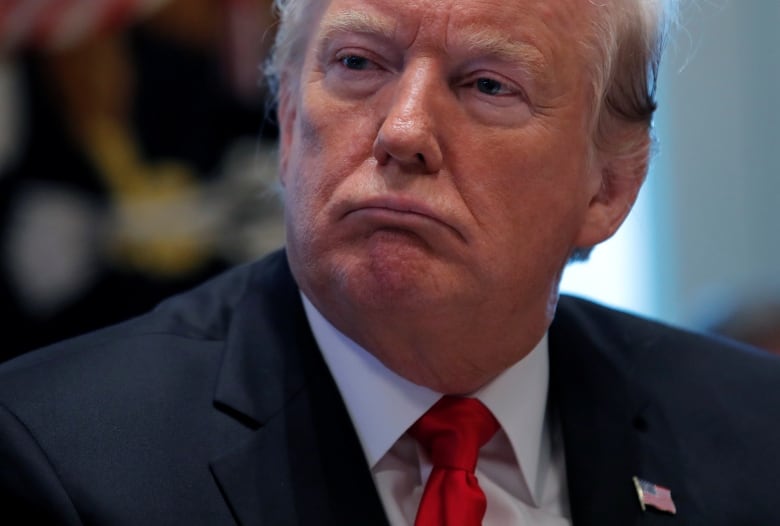 President Donald Trump argued that China has not treated the U.S. fairly in terms of trade. (Jim Young/Reuters)

Beijing’s growing commercial and political ties with its neighbours will make it harder for Washington to find “Asian countries willing to stand at its side and help contain China,” the newspaper said.

Still, cooling economic growth in both countries is increasing pressure to reach a settlement.

Chinese growth fell to a post-global crisis low of 6.5 per cent in the quarter ending in September. Auto sales tumbled 16 per cent in November over a year earlier. Weak real estate sales are forcing developers to cut prices.

The U.S. economy grew at an annual rate of 3.4 per cent in the third quarter and unemployment is at a five-decade low. But surveys show consumer confidence is weakening because of concern growth will slow this year.

For their part, Chinese officials are unhappy with U.S. curbs on exports of “dual use” technology with possible military applications. They complain China’s companies are treated unfairly in national security reviews of proposed corporate acquisitions, though almost all deals are approved unchanged.

Post Views: 282
Want To Change Your Life? Start Earning Up To $5,000 Per Week After Watching This Video. Click Here!
Related Topics:Chinesehardnewspaperpushtradewarns
Up Next

Setting up a home business | REM