Since the Ontario government cancelled more than 738 solar rooftop projects earlier this year, the solar industry has been urging the government to create a new free-market regulatory regime in the province.

All but the largest projects are on hold until the red tape that surrounds connecting to the grid in Ontario can be trimmed or eliminated, according to John Gorman, president of the Canadian Solar Industries Association.

Concerned about the cost of Ontario electricity, the Doug Ford government cancelled 759 solar and wind projects in June and ended the Green Energy Act — which was paying higher rates for renewable energy that was fed into the provincial grid — in December.

The previous Liberal government’s feed-in tariff for renewable electricity offered contracts at a fixed price above market rates in an effort to encourage the building of renewable systems — starting at 80 cents per KW/h for the first to sign such contracts in 2009, with the amount offered gradually reduced to about 22 cents.

That’s still higher than the rate actually paid by Ontario residents, which ranges from seven to 18 cents per KW/h.

But Gorman argues solar has the potential to be the cheapest power on offer, if the process of connecting to the grid can be streamlined.

The solar industry remains very active in markets like Alberta, where there is a simple regime for net metering — or selling off extra power that is not being used.

Alberta, Saskatchewan, Manitoba and Nova Scotia have all made progress in strengthening and streamlining net metering, Gorman said. Ontario has yet to catch up.

“We’re moving to a free market where everyone has the right to connect,” he says. “It can either be simple or very difficult.”

Currently Ontario has about 60 municipal and regional utilities. Each has a different process and contract to connect a solar system to the grid — contracts of up to 80 pages that can take months to implement.

The solar industry is out to change that.

“There is a real urgency to do this. The government wants to help farmers and homeowners save on electricity. This is a way of building capacity that does not draw on the tax base,” Gorman said.

That’s because the capital cost of building solar systems falls to the private sector or homeowner — not Ontario Hydro, which already has high debt charges from its nuclear system.

The owner of the solar system either gets a rebate on their electrical bill, or is reimbursed by their local utility, for feeding power into the grid.

The construction workers and technicians who put solar panels on roofs moved on to other work and weren’t greatly hurt by the cancellation of so many contracts this June, Gorman said.

But the First Nations, non-profits, municipal buildings, schools and homeowners who had planned to add rooftop solar were left without the opportunity to cut their electricity costs.

Fidel Reijerse, president of Resco Energy in Toronto, says these kinds of electricity users could benefit from a simplified net metering program in Ontario.

“Only the large projects are able to handle the bureaucratic burden and are able to move forward,” he said.

“A large swath of customers have been discouraged by regulation — everyone from the small business to the homeowner wanting solar on the roof.” 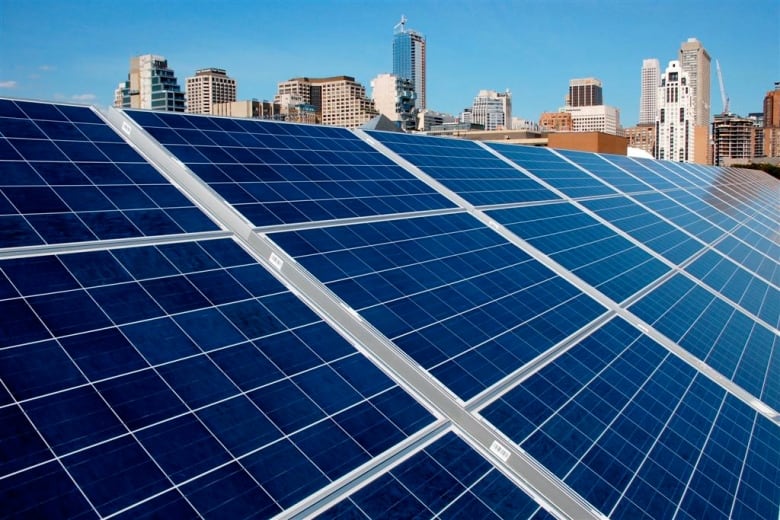 Fidel Reijerse of Resco Energy says only large rooftop projects on industrial and commercial buildings are going ahead, because of the cost and delays involved in connecting to the grid. (Resco Energy)

Reijerse says the Ontario government seems receptive to the idea of simplifying rules and regulations around solar — the Ford government campaigned this year on cutting red tape.

He said the industry has been lobbying several Ontario ministries, but primarily the premier’s office.

“In the solar industry, we don’t require money, just a change of regulations,” he said.

One recent step forward is that Ontario has aligned with the federal tax regime that allows writeoff of the capital costs of a solar system in a single year.

“That is a help, but only for a certain segment of the market,” Reijerse said. “You have to be a profitable Canadian company with a building where you use energy. Non-profits can’t take advantage or pension funds.”

So a 500 KW  system on a flat roof of an industrial building might find it is profitable to go forward.

But it doesn’t help the homeowner who wants rooftop solar.

Gorman said Ontario discourages third-party ownership — where a third party pays the capital costs of solar installation, in return for a portion of the proceeds.

“The homeowner is limited by their ability to borrow and they pay higher borrowing costs,” he said.

He said such systems have the potential to cut electricity costs for low-income homeowners.

Post Views: 211
Want To Change Your Life? Start Earning Up To $5,000 Per Week After Watching This Video. Click Here!
Related Topics:
Up Next

Post Views: 1,497
Want To Change Your Life? Start Earning Up To $5,000 Per Week After Watching This Video. Click Here!
Continue Reading

Post Views: 153
Want To Change Your Life? Start Earning Up To $5,000 Per Week After Watching This Video. Click Here!
Continue Reading