Marlboro cigarette maker Altria Group Inc on Thursday announced it would pay $12.8 billion to take a 35 per cent stake in Juul Labs Inc, a marriage between an old-line tobacco giant and a fast-growing electronic-cigarette rival looking to make inroads among smokers.

The deal values San Francisco-based Juul at $38 billion, more than double the roughly $16 billion valuation it fetched in a July private funding round, highlighting what Altria sees as its next phase of growth in the face of declining smoking rates and cigarette sales in the United States.

“We are taking significant action to prepare for a future where adult smokers overwhelmingly choose non-combustible products over cigarettes,” Altria COE Howard Willard said in a statement.

For Juul, which has risen swiftly over the last three years to become the U.S. market leader in e-cigarettes, the Altria investment is expected to give it more prominent distribution in convenience stores and other traditional retail channels.

The companies said Juul will be able to reach Altria’s customers through advertisements in traditional packs of cigarettes as well as direct mailers to customers.

Altria also brings years of lobbying expertise in Washington that could benefit Juul as the company navigates heightened federal scrutiny over its products’ popularity among teenagers.

“Our success ultimately depends on our ability to get our product in the hands of adult smokers and out of the hands of youth,” Juul Chief Executive Kevin Burns said in a statement Thursday, adding that “this investment and service agreement helps us do just that.”

Under terms of the deal, Altria is subject to a standstill agreement under which it may not buy additional Juul shares above its current interest. Altria has also agreed not to sell or transfer any Juul shares for six years from the closing of the deal.

The deal, which is subject to antitrust clearance, would give Altria the right to nominate directors representing a third of Juul’s board, the cigarette giant said. 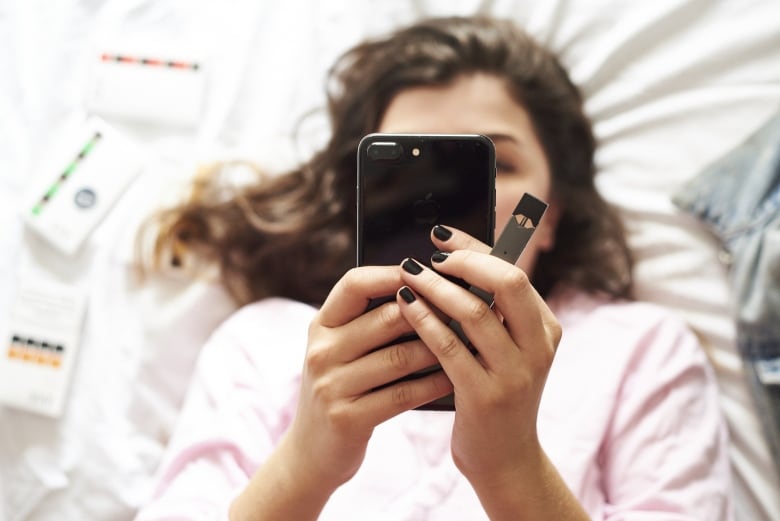 Only about 14 per cent of American adults still smoke, but vaping is more common among young people, such as this woman shown holding a Juul vape device while looking at her iPhone. (Gabby Jones/Bloomberg)

The company also said that it would participate in the e-vapor category only through Juul for at least six years.

Juul’s devices, which vaporize a nicotine-laced liquid and resemble a USB flash drive, grew from 13.6 percent of the market in early 2017 to more than 75 percent this month, according to a Wells Fargo analysis of Nielsen retail data. In its release Thursday, Altria said Juul represented approximately 30 percent of the U.S. e-cigarette space, when factoring in online sales and products in specialty stores such as vape shops.

The U.S. Food and Drug Administration last month announced new curbs on sales of flavored e-cigarette products, including Juul’s mango and cool cucumber, amid fears that the products could lead a new generation into nicotine addiction.

Juul has boosted its own lobbying spending, spending $890,000 so far in 2018, according to the Center for Responsive Politics. That is still far less than Altria’s more than $7 million toward lobbying this year, making it the biggest spender in the U.S. tobacco industry.

One unknown is how the deal could affect Juul’s reputation in the marketplace. In many ways the company positioned itself as the foe of big tobacco, saying in job postings that it was “disrupting one of the world’s largest and oldest industries” and “driving innovation to eliminate cigarettes.”

“We understand the controversy and skepticism that comes with an affiliation and partnership with the largest tobacco company in the U.S. We were skeptical as well,” he said, adding that the company ultimately was convinced the deal could “help accelerate our success switching adult smokers.”

Tobacco companies including Altria have been investing in e-cigarettes as U.S. smoking rates decline, but those products have lost significant market share over the last year as Juul’s popularity has surged.

Altria said this month it would discontinue some of its e-cigarette brands, based on their financial performance and will take a related pre-tax charge of $200 million in the fourth quarter.

Federal data from earlier this month showed 14 per cent of U.S. adults smoked cigarettes, the lowest level ever recorded.

Altria’s cigarette volumes declined by 6.3 per cent for the nine months of 2018, from a year earlier. The company’s share price has fallen by nearly 30 per cent over the last year.

Some analysts on Thursday expressed concern that Altria was paying too high of a price. A note from Stifel said the deal should help Altria “address the changing consumer attitudes toward nicotine” but that “the price paid offsets most of the future potential benefit” from a Juul investment.

Altria on Thursday also announced a cost-cutting program that includes workforce reductions and reduced third party spending, to save $500 million to $600 million annually by the end of 2019.

The company expects pre-tax charges of about $230 million to $280 million, or nine to 11 cents per share, the majority of which will be incurred in the fourth quarter of 2018.

Post Views: 328
Want To Change Your Life? Start Earning Up To $5,000 Per Week After Watching This Video. Click Here!
Related Topics:buyscompanyJuulMarlboroownervape
Up Next

Passenger bill of rights may let airlines ‘off the hook’ without an ombudsman: advocate

Post Views: 274
Want To Change Your Life? Start Earning Up To $5,000 Per Week After Watching This Video. Click Here!
Continue Reading

Post Views: 248
Want To Change Your Life? Start Earning Up To $5,000 Per Week After Watching This Video. Click Here!
Continue Reading

Post Views: 274
Want To Change Your Life? Start Earning Up To $5,000 Per Week After Watching This Video. Click Here!
Continue Reading