Tilray Inc. shares jumped Tuesday after the B.C.-based company took another step to strengthen its medical marijuana business outside Canada through a new collaboration with Novartis pharmaceutical group’s Sandoz AG.

“Tilray is a global company and we’re thrilled to build upon the success and momentum from our existing agreement with Sandoz Canada by taking our partnership global,” Tilray chief executive Brendan Kennedy said Tuesday.

Under its original agreement, announced in January 2018 after several months of talks, the companies began shipping non-combustible medical products with the Tilray and Sandoz/Novartis brands to customers in Canada last June.

The number of countries that have legalized medical cannabis has more than doubled to 35 from 15 in 2010, when Kennedy got into the business.

“It’s very clear to me how we go from 35, to 40, to 50, 60 countries globally … and this agreement enables us to ensure that our products get into the hands of more patients around the world,” Kennedy said.

Kennedy thinks Germany — with a larger population and economy than Canada — is a major opportunity because any doctor in that country is allowed to write a prescription to any patient for any illness with insurance coverage for medical cannabis products.

The United States is more difficult because its federal law is more restrictive, but Kennedy said there are also encouraging trends in that country. These include the electoral defeat of a staunch House of Representatives opponent of medical marijuana in November and the removal of Jeff Sessions as the U.S. attorney general. 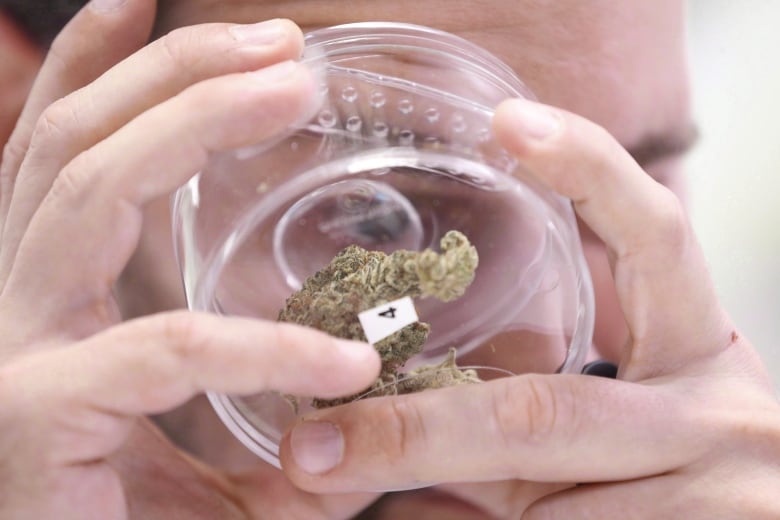 Jean Marc checks out a sample at a cannabis store in Winnipeg on October 17. Interest in publicly traded cannabis companies has been stoked by Canada’s legalization of recreational use of marijuana and its plan to make consumable forms of the drug legal next year. (John Woods/Canadian Press)

“We are hopeful that President Trump will sign it this week. That will provide an excellent opportunity for Tilray to capitalize on … hemp-derived CBD (cannabidiol) in the U.S.”

CBD has significant medical benefits with little to no psychoactive effects — unlike THC, which is scientifically known as delta-9-tetrahydrocannabinol and generally known as the ingredient in pot that gives users a high.

Kennedy said the U.S. Drug Enforcement Administration and the U.S. Federal Drug Administration have also given approvals for Tilray to export medical cannabis from Canada for a clinical trial in the United States, where Sandoz has a major pharmaceutical sales operation.

Interest in publicly traded cannabis companies has been stoked by Canada’s legalization of recreational use of marijuana and its plan to make consumable forms of the drug legal next year.

In addition, there have been a number of partnerships and tie-ups between cannabis companies and more established producers of consumer goods including beer makers Molson Coors and Constellation Brands, and cigarette maker Altria Group Inc.

Under the new agreement Tuesday, Sandoz may support Tilray’s commercialization of non-smokable and non-combustible medical cannabis products and work together on developing new products.

They may also partner to educate pharmacists and physicians about medical cannabis products.

Tilray Canada is a subsidiary of Tilray Inc., which is which is listed on the Nasdaq stock market and has operations in Australia, New Zealand, Germany, Latin America, Portugal and Canada.

In Canada, Tilray’s operation in Nanaimo, B.C., is licenced to produce dried cannabis and cannabis extracts, including both bottled oil and capsules, for medical purposes in Canada.

The company also has a licenced facility in Enniskillen, Ont., that it intends to use to service the adult market for dried cannabis and it’s seeking a licence for a processing facility in London, Ont.

Post Views: 346
Want To Change Your Life? Start Earning Up To $5,000 Per Week After Watching This Video. Click Here!
Related Topics:
Up Next

Post Views: 133
Want To Change Your Life? Start Earning Up To $5,000 Per Week After Watching This Video. Click Here!
Continue Reading

Post Views: 118
Want To Change Your Life? Start Earning Up To $5,000 Per Week After Watching This Video. Click Here!
Continue Reading