It’s been open season on the Quebec government since it was revealed the province will be getting a $1.4-billion boost in its equalization payment next year.

The equalization numbers, which were released Sunday, compounded existing ire in the West over comments Quebec Premier François Legault made last week.

First, he extinguished the flicker of hope that a defunct cross-Canada pipeline project, Energy East, could be revived. Then, he boasted Quebec’s hydroelectricity was “clean energy” compared Alberta’s “dirty oil.”

Alberta Premier Rachel Notley, who is heading into an election amid tumbling oil prices, did not appreciate Legault’s choice of adjective.

“He needs to get off his high horse,” Notley said Tuesday.

“He needs to understand not only is our product not dirty, but it actually funds the schools, the hospitals, the roads and potentially some of the hydroelectricity infrastructure in Quebec.” 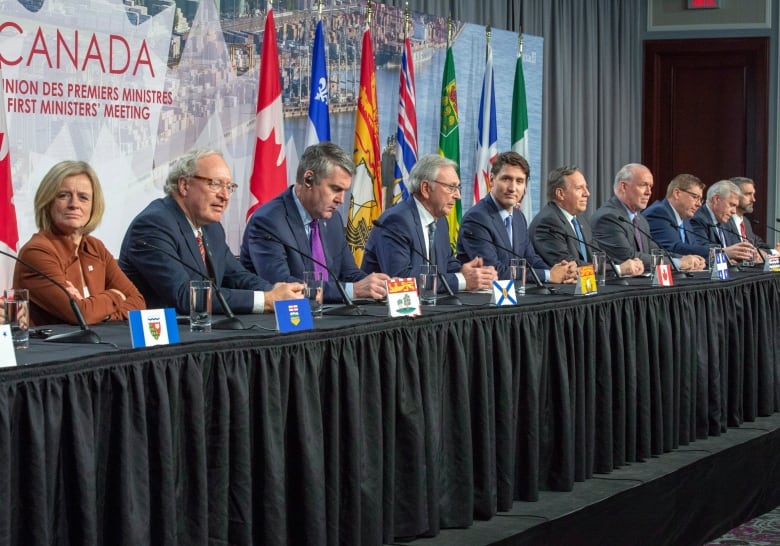 At a first ministers meeting in Montreal last week, Legault said there was ‘no social acceptability’ in Quebec for reviving the Energy East project. (Ryan Remiorz/Canadian Press)

On Wednesday, Quebec’s intergovernmental affairs minister was dispatched to sue for peace.

“We’re not at war with Alberta,” Sonia LeBel told reporters in Quebec City. “It was not our intention to offend them.”

But it will likely take more than a mea culpa for Quebec to escape the firing line. For that to happen, Western politicians will have to accept some hard truths about how the equalization program works.

The first is that the equalization program does not funnel money from one province to another.

Notley is hardly the only politician to suggest otherwise. Her chief rival, United Conservative Leader Jason Kenney, tweeted earlier this week, “It is not acceptable for a province to block our resources while benefiting massively from the wealth they generate.”

3/ generated from Alberta resources allow us to develop &amp; sell those resources at a fair price. <br><br>It is not acceptable for a province to block our resources while benefiting massively from the wealth they generate. <br><br>Unfortunately, Alberta’s NDP government is indifferent to this

The equalization envelope is drawn from federal, not provincial tax revenues. It is money Ottawa has collected from across the country — including Quebec taxpayers.

And provinces receive money under the program when their fiscal capacity, a measure of their potential revenue base, drops below the national average.

In other words, it is money handed out by the federal government to ensure provinces with smaller economies are able to offer the same level of services as those with access to more tax revenues.

It is up to the provinces, though, to decide how much they want to tax that revenue base.

“Quebec is often accused of stealing the money of Albertan taxpayers. But that’s not how the program works,” Daniel Béland​, a fiscal policy expert at the University of Saskatchewan, told Radio-Canada this week.

Quebec’s higher tax rate, by and large, funds its more general social programs — an option politicians in Alberta and Saskatchewan have refused to entertain.

“Those are political choices that have nothing to do with equalization,” Béland said.

What’s all the fuss about Energy East?

Second, if there are reasons to revive the Energy East project — which would transport crude oil from Alberta to export terminals in New Brunswick — its impact on equalization shouldn’t be one of them.

The pipeline, if it ever gets built, would indeed increase Quebec’s fiscal capacity, creating jobs and property value. 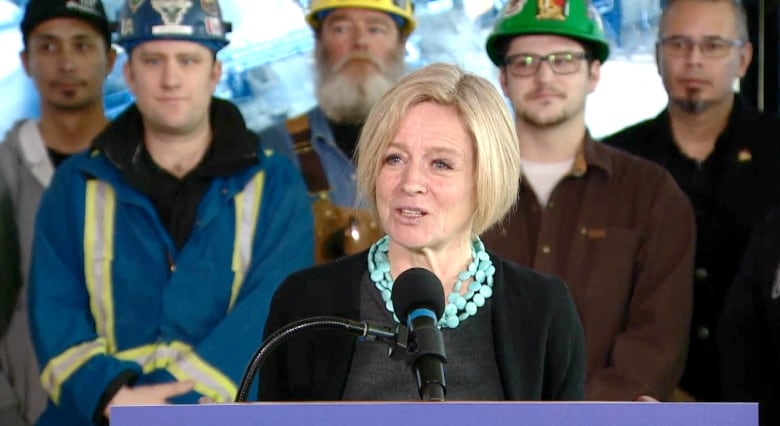 Premier Rachel Notley said Tuesday that Legault needs to ‘get off his high horse’ when criticizing the province’s oil. (David Bajer/CBC)

But according to Trevor Tombe, an economist at the University of Calgary, it wouldn’t dramatically change what Quebec receives.

“For perspective, the overall fiscal capacity of Quebec in this latest year is nearly $64 billion. So a single project, here or there, won’t mean big swings in that number,” said Tombe.

Moreover, there are currently three viable pipeline projects already on the table for Alberta: Keystone, Trans Mountain and Enbridge’s Line 3.

Together, they would alleviate the pipeline constraints that are behind the current crisis in oil prices, Tombe added.

Finally, Western Canada should probably get used to Quebec receiving equalization payments, unless the system is radically overhauled.

There are two general paths by which Quebec could become a “have” province, according to Tombe’s calculations.

Its economy could grow by one-third, or generate $20 billion more in non-renewable resource revenues. Resource revenue in Quebec currently stands at $3.4 billion. 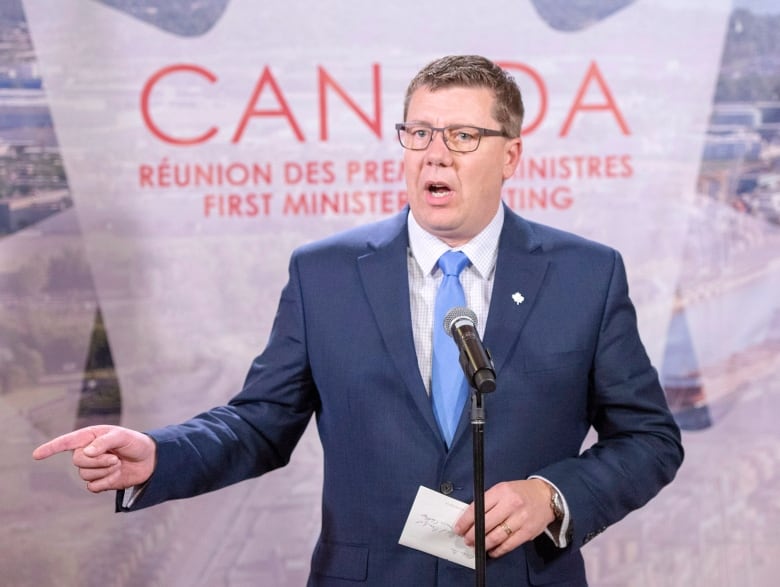 Saskatchewan Premier Scott Moe is among the Western politicians who have been critical about the equalization program. (Ryan Remiorz/Canadian Press)

“That’s a completely implausible change in a province’s situation,” said Tombe. “Quebec is quite far from a situation where it wouldn’t receive equalization at all.”

This is a point Legault may also want to take to heart. He made sweeping promises before his election to wean Quebec off equalization.

But a long-term forecast conducted this year by the Parliamentary Budget Office shows Quebec is actually slated to increase its dependence on equalization, as measured as a share of its GDP.

That’s a reflection, Tombe said, of an aging population that earns less in retirement, which in terms of the equalization formula translates into reduced fiscal capacity.

None of this means Quebec’s economy is in trouble (GDP growth of 2.5 per cent this year) or that it has a poor credit rating (AA- compared to Alberta’s A+).

It does mean, though, that Quebec is set to remain a handy foil for Western politicians looking to make political gains.

Post Views: 297
Want To Change Your Life? Start Earning Up To $5,000 Per Week After Watching This Video. Click Here!
Related Topics:equalizationhardOilpoliticiansQuebectruthsWestern
Up Next

The mortgage delinquency rate is the percent of mortgages overdue. Today’s Equifax numbers are mortgages that are more than 90 days overdue. Pretty straight-forward, but there’s two things to keep in mind – seasonality and level.

Mortgage delinquency rates, like other forms of credit delinquencies, tend to be seasonal. When looking at seasonally sensitive numbers, quarterly changes don’t tell us a lot. Unless there’s a sudden and abrupt change that’s not seasonally observed. Instead, it’s the year-over-year change of the quarter that’s more important.

The next note to keep in mind is there’s no universally high or low level for delinquencies. Some regions like Montreal, have always had higher levels of delinquencies. Cities like Toronto and Vancouver are always lower than the national level. With regional variances like this, it’s more important to focus on the velocity of change. If Vancouver had the same level of delinquencies as Montreal, but with Vancouver supersized mortgages – it would be catastrophic for the economy. It only needs to be up a few points for real estate markets to be in trouble, before it becomes an emergency.

Post Views: 40
Want To Change Your Life? Start Earning Up To $5,000 Per Week After Watching This Video. Click Here!
Continue Reading

Canada’s central bank is desperately trying to prop up real estate markets with liquidity. Bank of Canada (BoC) has been injecting billions into Canada Mortgage Bonds (CMBs). The central bank began purchasing a few million worth of bonds during last year’s real estate slow down. As the pandemic hit, the BoC began buying hundreds of millions worth of CMBs per week. The flood of liquidity has a limited impact on preserving prices, but creates a massive withdrawal risk.

Canada mortgage bonds (CMBs) are debt securities guaranteed by the Government of Canada. Basically, lenders originate mortgages, and then group them into a pool. The pool is then sold to the government as a mortgage backed security (MBS). In order to buy MBSs, the government sells CMBs to investors to generate the funds. The cash flow from the MBS is then used to make payments to investors holding CMBs. Long story short, the CMBs are a state secured vehicle for mortgage financing.

Since the government of Canada guarantees all CMBs, they pay very little interest. In a normal market, when demand rises for CMBs, interest paid falls even further. When demand drops, interest rates typically rise to attract more investment. Simple supply and demand, right? Not in a country that’s gone all-in on its housing bubble.

When real estate markets began looking a little tired last year, the BoC stepped in. They started buying CMBs to “improve liquidity,” which is bankster for suppressing rates. At first, they said it was going to be on a non-competitive basis – meaning they would support market rates and prevent increases. Starting on March 20 of this year though, they announced they would start buying on a competitive basis. They now actively play a role in driving mortgage rates down. This drives investors even further away from the asset class, meaning they have to buy even more. In other words, money printer goes brrr.

The BoC Is Injecting Hundreds of Millions Per Week

The BoC has purchased billions in CMBs since the beginning of the year. As of July 22, the BoC held $7.95 billion in CMBs, up $234 million from a week before. That works out to a balance increase of 1,450% from the same week last year. What started as just a few million worth of bonds, has turned into a few million per week.

Post Views: 45
Want To Change Your Life? Start Earning Up To $5,000 Per Week After Watching This Video. Click Here!
Continue Reading

Thanks to a creative Calgary family who had a vision for their vacation home, J.R.R. Tolkien fans don’t need to journey to Middle-earth to visit the Shire.

They only need to know where to look in the Alberta foothills.

An earthen home built into the hillside near Millarville, Alta., by Calgarians Rodney and Ouida Touche in 1971 is on the market for the first time since its construction.

It was designed by Bill Milne, the architect behind the Calgary Tower and the city’s pathway system.

And if you ask many of the Millarville locals about a striking piece of real estate — the home with rounded walls and windows, hidden by its partially bermed construction — they will likely recognize the property they call the “Hobbit house.”

As a child who spent summers there with her parents and siblings, Karen Lightstone did not understand the nickname.

As an adult who decided with her family to sell the house, it finally clicked.

“I have a copy of The Hobbit, and I pulled it out when we were to put it on the market,” Lightstone said.

“And the whole opening paragraph of Chapter 1 talks about the round door opening to a long, tube-shaped hallway. The best rooms are on the left because that’s where all the windows were. And I was like, ‘Oh my Lord, this is exactly what they built.'”

Home hidden to keep from being ‘eyesore’ in landscape

The house was built by carving away half of a hill, Lightstone said, and pouring concrete between domes made of mesh and rebar.

Because the home is partially bermed, it’s hard to see — a conscious decision, made to keep the home from ruining the sweeping landscape.

“My parents were trying to figure out where a good spot would be. They really didn’t want it visible on the ridge. They didn’t want any of the neighbours to be able to just see this house, because to them, that would be a bit of an eyesore,” Lightstone said.

“I don’t know how they came to decide exactly how it was going to be. But I do know — from doing some trips with my dad and from conversations he had — they were always interested in something unique like that.”

Vancouver real estate: what $1 million can buy in Canada’s most expensive city

Say no to raw fish: Eating raw or undercooked fish can expose consumers to antibiotic-resistant superbugs

Spice up your diet with paprika’s health benefits

5 Health benefits of mangoes (as well as 3 healthy recipes)