Starbucks is expanding delivery to more stores in the U.S. and China as it tries to accelerate growth in those two markets.

The company says it will offer delivery from 2,000 U.S. stores by next summer through a partnership with Uber Eats. It isn’t yet saying which stores will offer the service.

In China, delivery will be offered from 2,000 stores in 30 cities by the end of this year, up from 150 stores at the end of September. Starbucks began working with its Chinese delivery partner, Ele.me, three months ago.

Starbucks made the comments at an investor presentation Thursday in New York. The Seattle-based company said it has simplified its business in recent years — by closing its Teavana stores and selling many European stores to franchisees, for example — so it can focus more directly on the U.S. and China.

In the U.S., its largest market, Starbucks says it still sees significant opportunities to expand and expects to open 550 net new stores annually over the next few years. The company also plans to close 150 underperforming stores in 2019.

Delivery is one area where it could expand. Investors questioned the economics of Uber Eats, asking whether Starbucks will earn less because of the fees Uber charges. 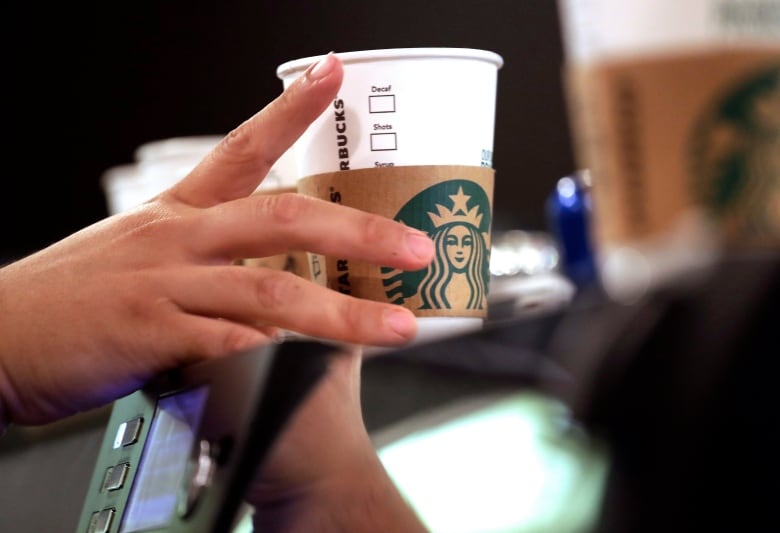 A barista reaches for an empty cup at a Starbucks in the Pike Place Market in Seattle May 29. Starbucks says it’s experimenting with tamper-resistant delivery bags, hotter coffee and better lids to ensure a good delivery experience. (Elaine Thompson/Associated Press)

Roz Brewer, Starbucks’ group president of the Americas, said the company is still studying that. In Miami, where it has been running a pilot program with 200 stores, she said the company has found that delivery works best in dense urban areas where Uber Eats’ delivery fees are lower because of high demand.

And CEO Kevin Johnson noted that customers are spending two to three times more on delivery orders than they would in the store, so that makes the partnership more appealing.

Johnson says Starbucks has learned a lot about delivery since launching it in China in September. The company has special spill-proof cups, for example, and is making beverages hotter so they will be the right temperature to drink when they arrive.

Johnson said the company has also opened two small kitchens in the back of grocery stores in China so it can quickly fulfil delivery orders. That is one idea that could eventually come to the U.S., he said. The company is also packing orders in tamper-resistant bags, so customers will feel more comfortable getting them from a third-party driver.

Johnson said it’s difficult to say what percentage of orders either in the U.S. or China will eventually come from delivery. Starbucks’ mobile ordering and payment for pickup in U.S. stores more than doubled to 12 per cent of orders between 2016 and 2018, and that could also happen with digital ordering, he said.

Customer behaviours are shifting rapidly. We must continue to adapt and adapt rapidly to meet our customers where they are.– Kevin Johnson, Starbucks CEO

“Customer behaviours are shifting rapidly,” Johnson told The Associated Press. “We must continue to adapt and adapt rapidly to meet our customers where they are.”

Even as it’s expanding delivery, Starbucks is continuing to try to improve its in-store experience. Brewer said Starbucks plans to renovate one-third of its U.S. stores this year to add equipment and redo delivery and mobile pickup areas.

Starbucks is also opening a high-end Reserve Roastery in New York on Friday. The 23,000-square-foot store includes a bar with coffee- and tea-themed cocktails, Italian pastries and rare small-batch coffees roasted on site.

Johnson said Starbucks plans to open two more roasteries, in Tokyo and Chicago, next year, but hasn’t committed to more after that. The company also has them in Seattle, Shanghai and Milan.

“It acts as a brand amplifier,” Johnson said, noting that customers are still lining up to get inside the Shanghai store a year after its opening.

Post Views: 326
Want To Change Your Life? Start Earning Up To $5,000 Per Week After Watching This Video. Click Here!
Related Topics:ChinaDeliverStarbucksStores
Up Next