Last week, the signs saying ‘The Adelaide Hotel’ came down. The name, an interim measure chosen for the duration of the renovation of Toronto’s former Trump Hotel and Residences, was done with. All finished up inside, new signs saying simply “St. Regis” went up in their place. 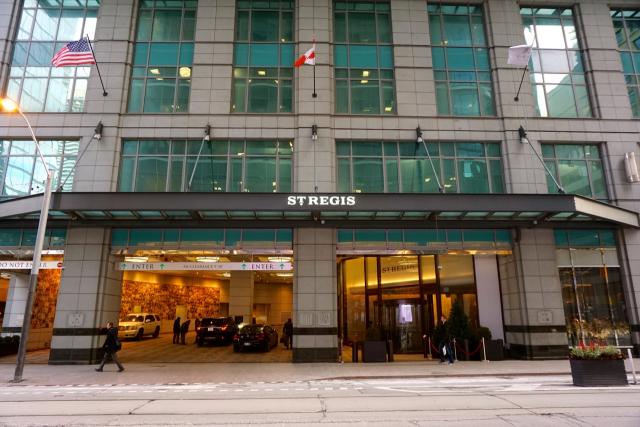 Looking across Adelaide Street to the St. Regis Toronto, image by Craig White

Inside the front doors, if you visited during the building’s original incarnation, you’ll noice major changes to the space which was predominantly black before. Redesigned by DesignAgency and Chapi Chapo Design, now warm wood and marble tones have been added, and the wall between the bar and reception has come down, replaced with a divider that separates reception from the lounge bar. It’s much more open, and creates a much roomier space to relax in. 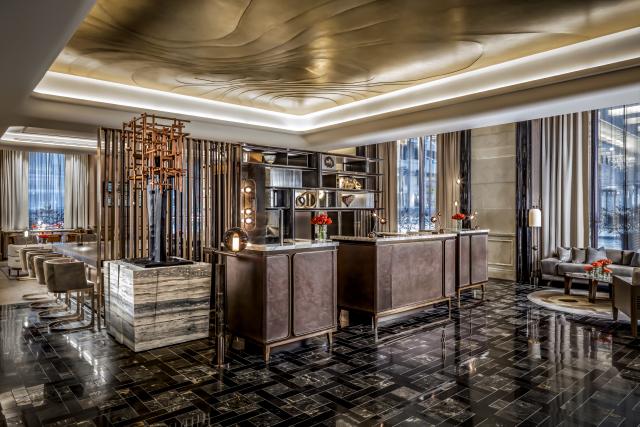 The lobby and lounge at the St. Regis Toronto, image courtesy of Marriott Hotels and Resorts 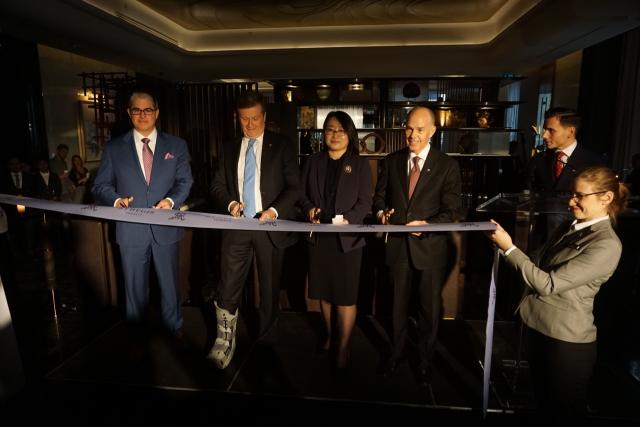 Cutting the ribbon on the St. Regis Toronto, image by Craig White

Following a ribbon cutting with officials from Marriott, Innvest, the St. Regis Toronto’s General Manager Tim Terceira, and Toronto Mayor John Tory, the first of the St. Regis’ nightly sundown sabrage ceremonies was performed, when a sabre is quickly drawn up the neck of a champagne bottle, taking its top and cork off. If you’re in the lobby lounge at that time, you’ll be treated to a glass of the bubbly. 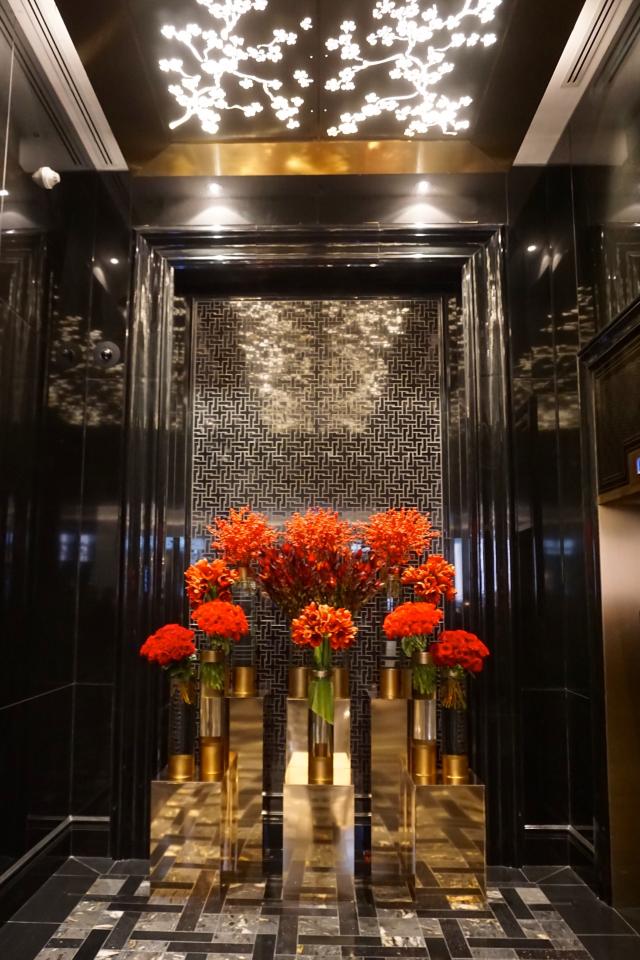 One of the major changes to the St. Regis is found on the 31st floor, where the restaurant which was known as America, again, featuring a predominantly high contrast black design before, has been completely redesigned by DesignAgency and is now rechristened Louix Louis. (You pronounce that the same for both spellings: Louie Louie.) 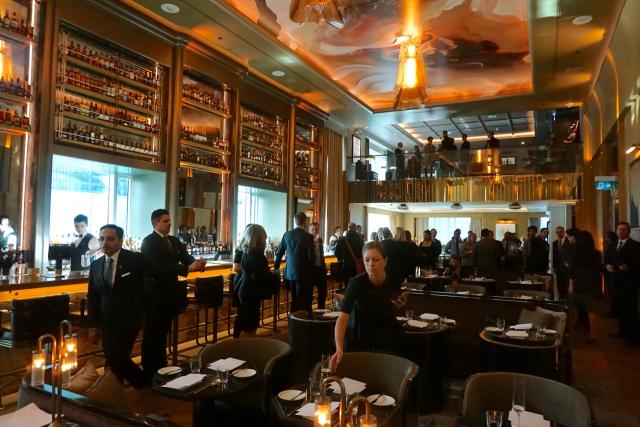 Having moved the bar out from under the single-height section at the west end of the room, it has been relocated along the south wall, with shelves and shelves of whisky climbing four metres and now stocking bottles from over 500 brands. While it is a restaurant and not just a bar, the whole room has been redesigned around whisky, with the deck inspiration being an imagining on what it’s like to be in a whisky glass. The tones are less glitzy while being warmer and informal, but still emphasizing elegance and sophistication. 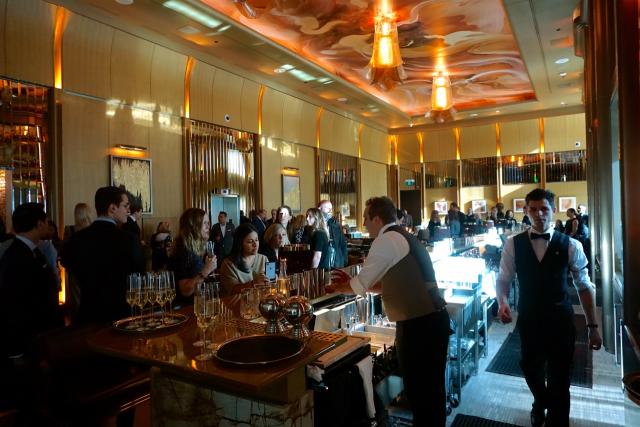 Behind the bar Louix Louis at the St. Regis Toronto, image by Craig White

Especially comfortable and intimate is the west end of the room where the bar used to be, and where tables can be had with 31st floor views looking across Canada’s financial crossroads of King and Bay, with the vista stretching out beyond Union Station to the lake. 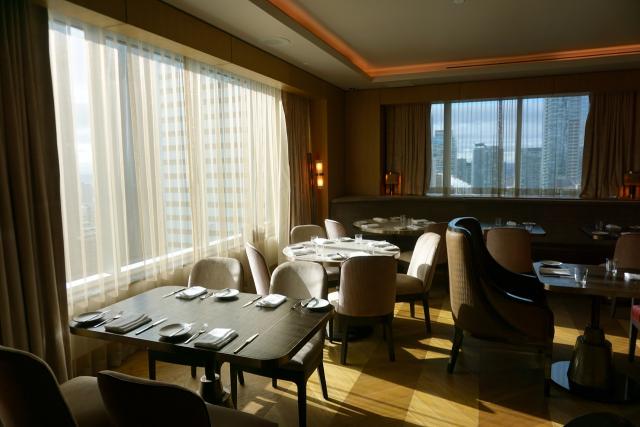 Intimate setting with a view at Louix Louis at the St. Regis Toronto, image by Craig White

The hotel rooms have been getting updates too, with certain floors complete now. Full floors will be closed to complete the renovations over the coming months. 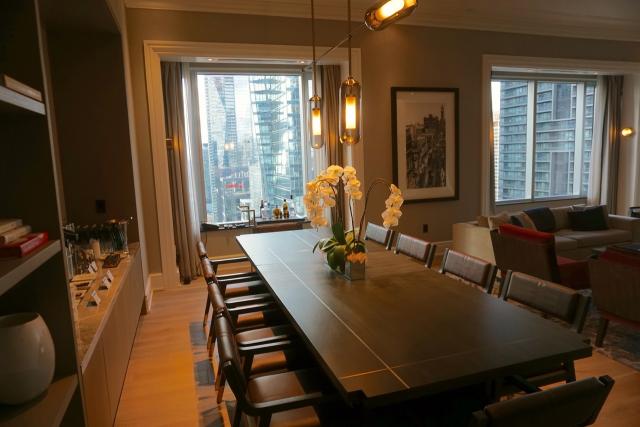 Inside the John Jacob Astor suite at the St. Regis Toronto, image by Craig White

We took a look at the John Jacob Astor suite on the 30th floor, the largest in the hotel wth a large meeting space, a “living” area, a kitchen, and two bedrooms. 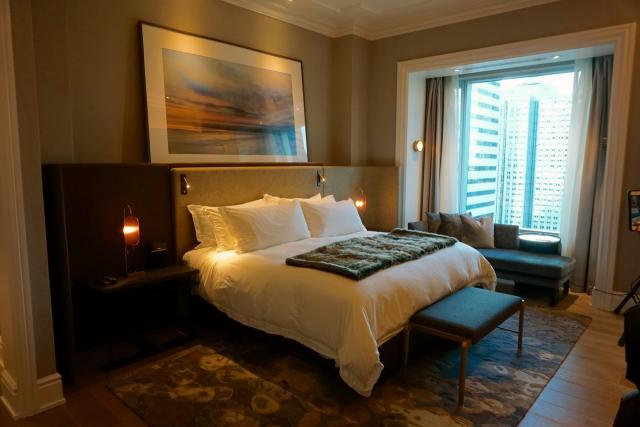 Bedroom in the John Jacob Astor suite at the St. Regis Toronto, image by Craig White

The larger of the two bedrooms is pictured above, its bathroom below. Everything here is luxury and elegance, and the hotel will no doubt become a favourite of the well-heeled traveler as time progresses. The same can be sad for the residential suites in the building’s upper floors now too. The new building ownership, management and branding has made it much more attractive to live in the tower, and in the time since conversion on July 27, 2017, 56 suites have sold, including the massive three-level penthouse suite. Only 18 suites remain for sale in the building, and we are told “they are going fast”. 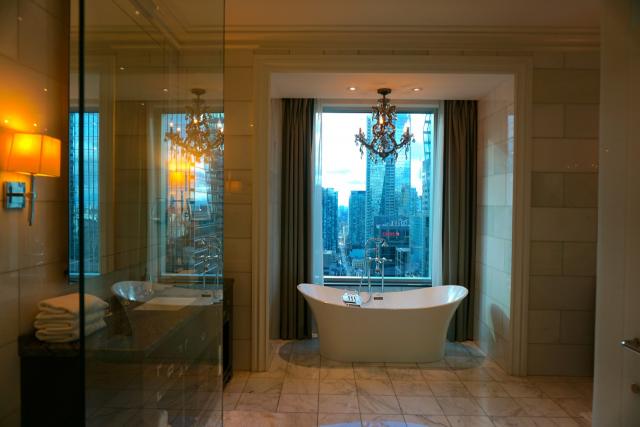 Bathroom in the John Jacob Astor suite at the St. Regis Toronto, image by Craig White

Post Views: 898
Want To Change Your Life? Start Earning Up To $5,000 Per Week After Watching This Video. Click Here!
Related Topics:completeRebrandingRegisRetrofitStTorontoTrump
Up Next