A 10-year-old Winnipeg boy is collecting and repurposing used prosthetic limbs for people just like him.

Iahnijah Opaleke — who uses an artificial leg — says he was inspired to recycle the devices during a trip to Jamaica when he was five years old, before one of his surgeries.

“I saw a man, he had no legs and he was riding a skateboard to get around everywhere,” Iahnijah said.

“So I just said, ‘Why doesn‘t he have a prosthetic like me?’ I just had the idea.”

His mom, Tina, says Iahnijah offered the stranger his own artificial leg right there in the market.

“He probably doesn‘t remember because he was a little guy. But he was going to full-on take his prosthetic off and give it to him. And the guy was like, ‘You would do that for me?’ It was a very emotional moment,” she said.

“I realized … if an amputee would be willing to repurpose his own prosthetic to somebody else and donate it, I just thought, why don’t we ask the other amputees too?”

A different meaning for disability’s name

After returning from their trip, Iahnijah and his mom started a group to collect and distribute artificial limbs to others around the world.

“We’re sending prosthetics to people who need them, who can’t get prosthetics where they are or it costs too much money,”  Iahnijah said.

They call the group PFFD: Prosthetics for Foreign Donation. That’s also the acronym for what Iahnijah has: proximal femoral focal deficiency.

The rare birth defect affects a person’s pelvis, hip and thighbone. It causes one leg to be significantly shorter than the other. 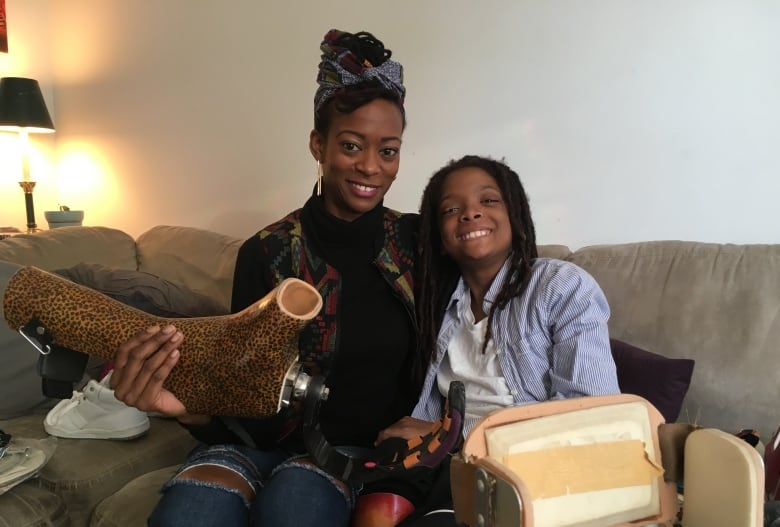 Tina and Iahnijah Opaleke have created a group called PFFD, which stands for Prosthetics for Foreign Donation. They’ve started collecting artificial limbs that can be used by people with disabilities in other countries. (Marina von Stackelberg/CBC)

Tina says an amputee will go through many prosthetics in their lifetime, but often don’t know what to do with the old ones when they need to be replaced or they grow out of them.

“Some people are really attached to their [prosthetic] limbs,” she said. “It’s a part of them.”

That was apparent when they received a donation from a woman in Toronto, whose father had died.

“Her father was a veteran. She donated his old [prosthetic] legs. She specifically wanted her father to live on. It was such a beautiful moment. She was giving her father’s love to Iahnijah.”

Along with the emotional attachment, each device costs thousands of dollars, so Tina says many people also can’t bear to throw them out.

Prosthetics can’t be reused in Canada

Tina says health regulations in Canada prevent people from using a recycled prosthetic. But the used limbs can make a huge difference for people in other parts of the world.

“A lot of people in some countries, if you have a disability, you beg,” she said. “There’s so much more you can do, and I think having your own independence, you can walk your own path.”

So far, they’ve collected dozens of used prosthetic arms and legs, special socks and other accessories, along with shoes for children with club feet.

“The first aspect has just been putting it out there in every rehabilitation centre, every medical facility that we visit, or that we’ve heard about, we tell people about us,” Tina said.

“Now, we’re deciding who to send it to. People get ahold of us through email or through Facebook and request. There was a gentleman who requested an arm prosthetic, so we sent one to Trinidad.” 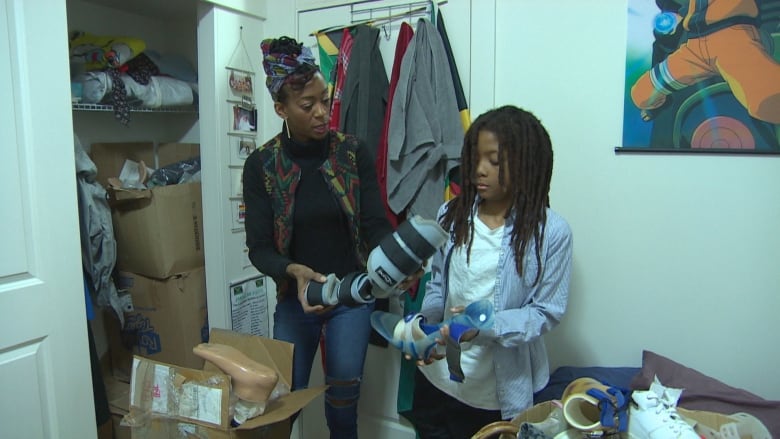 The duo have collected boxes worth of used artificial limbs, and sent them to places like Tanzania and Trinidad. (Warren Kay/CBC)

She says some people who donate their old artificial limbs will check back in to see who received their arm or leg.

Iahnijah says it’s a good feeling to know he can help another person in the world experience what it’s like to have a prosthetic.

“It just feels awesome. It’s making me happy every single day I put it on. It’s one of the best things I could ask for.”

A 10-year-old Winnipeg boy is collecting and repurposing used prosthetic limbs for people just like him. 2:10

Post Views: 190
Want To Change Your Life? Start Earning Up To $5,000 Per Week After Watching This Video. Click Here!
Related Topics:
Up Next

Post Views: 245
Want To Change Your Life? Start Earning Up To $5,000 Per Week After Watching This Video. Click Here!
Continue Reading