Welcome to Yonge Street, home to Toronto’s most famous thoroughfare—the Yonge-Dundas Square, College Park, The Eaton Centre and many more. It forms the spine—and is arguable the heart of—the city; with theatres, high rising towers, 20th century fine-tuned retail stores, before stretching down to the Lake, then past Bloor Street, midtown, uptown, out-of-town, and into the seemingly infinite north.

However, despite its appearance as the ‘front doorstep’ to the city, the apparent lack of infrastructure suggests otherwise. The view from the northside of Dundas reveals relatively narrow sidewalks, an apparent lack of public amenities, and the generally car-dominated street-level experience that creates a false impression on the reality of a regular pedestrian and transit hub. 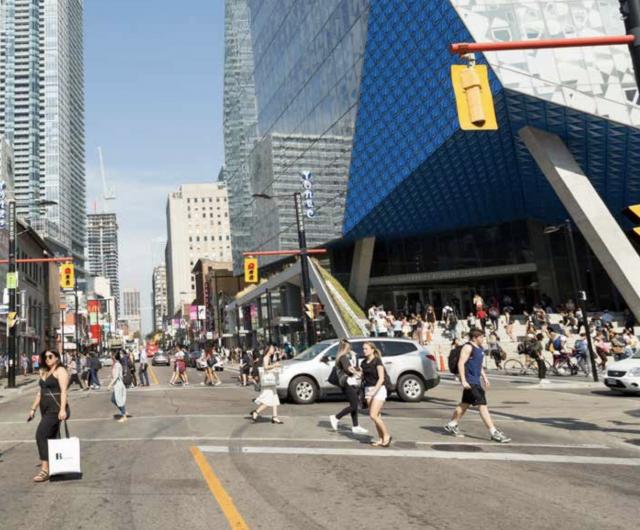 But, the fortune of the street is about to change as a new report from Ryerson University’s City Building Institute (CBI) suggests that they have joined the ongoing push to renovate downtown Yonge Street. Ryerson argues for a pedestrian-oriented public realm that would completely transform the street into an ‘outdoor living room’ — and an exhibition for the university itself.

In study Can Ryerson Benefit From A Better Yonge Street?, authored by Dr. Zhixi Cecilia Zhuang, it builds on a robust body of research and public consultation regarding the future of the corridor. Utilizing a combination of both public input and hard data, the Downtown Yonge BIA’s 2014 Yonge Love community consultation series created a convincing case for authorizing the street’s transformation. 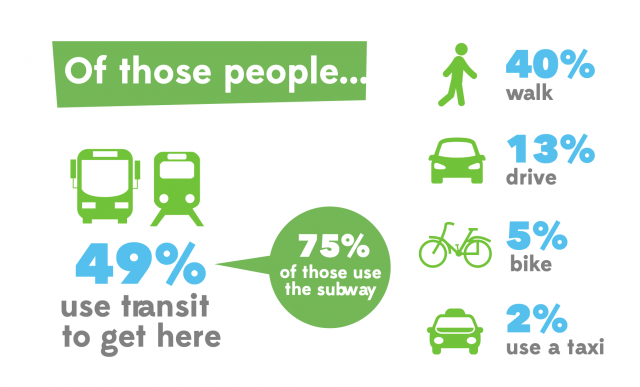 The data—which covered the area from Grosvenor to Richmond—revealed that only 13% of almost 600,000 daytime visitors in the area are drivers, compared to the 40% that walk, and the 49% that use public transit. Thus, it was rather expected that Yonge Love respondents’ greatest priorities were for a walkable (70%), clean (69%), and pedestrian-friendly (67%) environment. 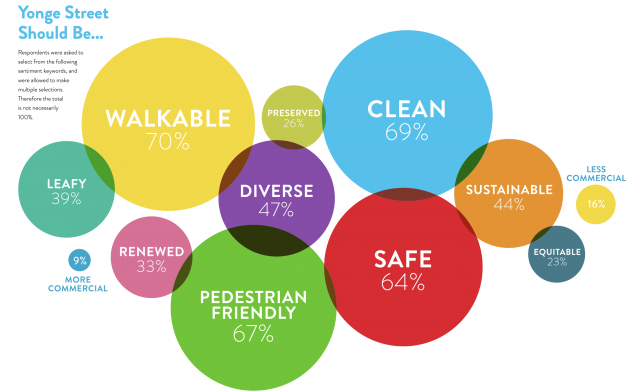 Also, recently, the Downtown Yonge BIA’s 22 traffic counters found that pedestrians consistently outnumbered vehicles from October 2017 and 2018 — even during the winter periods.

According to the City of Toronto, “[d]aily pedestrian volumes on Yonge Street at Dundas Street are approaching 100,000 per day and represent Toronto’s busiest intersection.”

This signifies that a more pedestrian-friendlier environment could be an advantage for businesses. More importantly, having an improved pedestrian experience would present opportunities to create a more safe, accessible, and inclusive public realm. 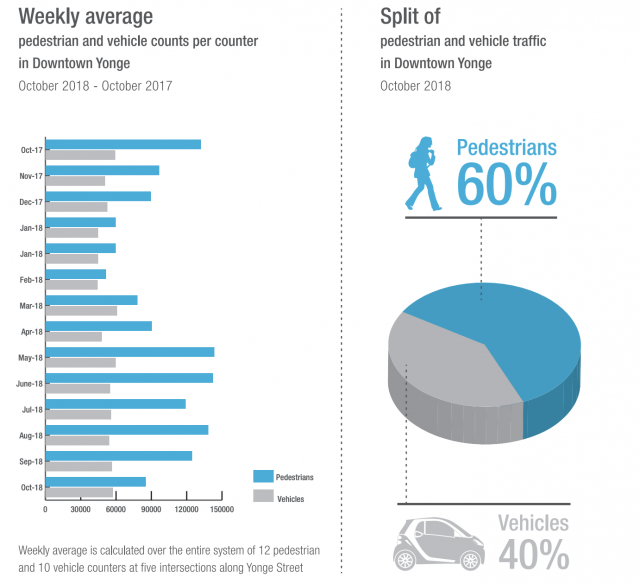 Nonetheless, what effect would it have on the Ryerson University? Irrespective of the fact that a campus is situated just northeast of Yonge & Dundas, the university has still lacked a strong presence on the street. However, that is bound to change with the opening of the school’s Student Learning Centre (SLC) in 2015, the university rolled out a grand welcome to the campus, with a cascade of public seating and hangout space leading way to a building that angles out towards Yonge.

Today, the intersection of Yonge & Gould is an attractive and spontaneous location, and a key spot for witnessing some of Toronto’s awesome soccer tricks—hinting to a dormant campus energy, which disappears as the Gould Street campus paves way to Yonge.

The benefits for Ryerson University are quite obvious as through better integrating pedestrian-oriented Gould Street with Yonge, the reportnotes that the university can now demand a stronger civic identity through partnerships with the City of Toronto and the Downtown Yonge BIA.

“If Ryerson were to engage in the Downtown Yonge Street improvements, it could open opportunities to partner with the City of Toronto and the Downtown Yonge BIA on longer-term sustainability initiatives in the neighbourhood,” said the report. “For example, promoting green infrastructure and pedestrian-focused environmental design encourages carbon footprint reduction and advances wellness initiatives.”

The advocacy for a transformation from Ryerson is built on the back of the firm public support evidenced through the Downtown Yonge BIA’s polling and the involvement by BIA indicates business continuity. Also, the ongoing initiative by CouncillorKristyn Wong-Tam, Yonge Tomorrow Study will provide crucial support from the municipality.

Being an important part of daily life and civic consciousness, Yonge Street is key to Toronto. However, despite being a relatively cheap task, creating an improved public realm is long overdue, but with the input of local stakeholders it makes it alot more urgent.

Post Views: 431
Want To Change Your Life? Start Earning Up To $5,000 Per Week After Watching This Video. Click Here!
Related Topics:caseDowntownRevivalRyersonStreetYonge
Up Next

Qatar to leave OPEC and set own oil and gas output

Post Views: 72
Want To Change Your Life? Start Earning Up To $5,000 Per Week After Watching This Video. Click Here!
Continue Reading

Post Views: 99
Want To Change Your Life? Start Earning Up To $5,000 Per Week After Watching This Video. Click Here!
Continue Reading