Delegates from nearly 200 nations on Sunday began two weeks of talks to tackle deep political divisions at the most important UN meeting on global warming since the landmark 2015 Paris deal to shift away from fossil fuels.

Expectations are low that negotiations in Katowice, at the heart of Poland’s coal region, will be sufficient to address concerns laid out in reports over recent weeks on the severity of rising greenhouse gas emissions.

The political climate has been transformed since the Paris agreement and the fragile global unity that brought about that accord has shattered. 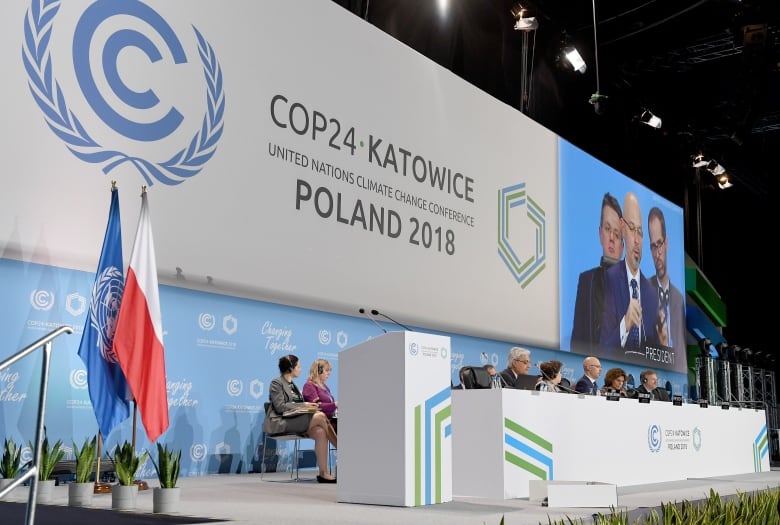 Polish Secretary of State Michal Kurtyka, on screen, speaks during the inaugural session at the 24th Conference of the Parties to the United Nations Framework Convention on Climate Change (COP24) summit on Sunday in Katowice. (Janek Skarzynski/AFP/Getty Images)

“We will all have to show creativity and flexibility,”​ Kurtyka said.

Brazil pulls out of hosting duties

Stoking the tensions, Brazil has gone back on an earlier promise to host next year’s UN climate conference.

The United States, meanwhile, reiterated at the G20 summit in Argentina on Saturday its decision to withdraw from the Paris accord and a U.S. commitment to using all energy sources.

The other members of the group of industrialized nations — including the biggest polluter, China — reaffirmed their commitment to implementing the Paris deal, taking into account their national circumstances and relative capabilities.

Last June, 23 nations ranging from Canada to France to Britain to Pacific island states said they would try to limit their greenhouse gas emissions more than already planned under the Paris climate agreement by 2020.

But a recent United Nations report warning CO2 emissions are rising for the first time in four years and named Canada as one of several countries that are as falling short on their commitment to the targets from the Paris accord.

“When you look at our emissions, and we modelled this and we’ve reported this, that our emissions have gone down,” Canadian Environment Minister Catherine McKenna told CBC’s The Weekly on Sunday — adding, “It doesn’t happen overnight.”

“It’s not just about the federal government,” McKenna said. “It really is critically important that provinces step up, and cities, because a lot of the emissions are 40 per cent within the cities’ control. We need provinces to understand that it can’t be free to pollute, that you’ll have more pollution.”

The provinces of Ontario, Saskatchewan, Manitoba and New Brunswick don’t have carbon pricing plans that meet federal standards and are opposed to Prime Minister Justin Trudeau’s plan to impose a federal carbon tax next year.

“When you look at California, it’s the fifth largest economy — it’s got a price on pollution. Quebec is part of that market. British Columbia has been able to demonstrate that you can reduce emissions while you have a price on pollution and have a fast-growing clean sector. So we know what the solutions are.”

The Katowice talks precede an end-of-year deadline to produce a “rule book” to flesh out the broad details that were agreed in Paris, aimed at limiting the rise in global temperatures to between 1.5 and 2 degrees Celsius.

To give the negotiations a better chance, the start of the Katowice talks was brought forward by a day.

Poland is hosting UN climate negotiations for a third time, but the nation remains hooked on coal, the most carbon-intensive fossil fuel. Coal provides about 80 per cent of Poland’s power and has been a major source of employment and national pride.

The younger generation is less emotionally attached to coal and is increasingly environmentally aware, though any phasing out of the fuel in Poland is likely to be slow.

The energy ministry said only last week that the country plans to invest in new coal capacity while its long-term energy strategy assumes it will still obtain about 60 per cent of its power from coal in 2030.

Prime Minister Justin Trudeau campaigned on promises to combat climate change. Three years later, how have those held up? 12:48

Post Views: 333
Want To Change Your Life? Start Earning Up To $5,000 Per Week After Watching This Video. Click Here!
Related Topics:BookclimatedeadlineloomingParisPolandruletalks
Up Next

Climate talks begin in Poland, with deadline looming for Paris accord ‘rule book’

Post Views: 203
Want To Change Your Life? Start Earning Up To $5,000 Per Week After Watching This Video. Click Here!
Continue Reading

Post Views: 47
Want To Change Your Life? Start Earning Up To $5,000 Per Week After Watching This Video. Click Here!
Continue Reading