Newfoundland and Labrador is in the throes of the “most intense storm” on the planet, according to a meteorologist in Gander.

“[It’s] not fun to be out in, or drive anywhere in,” said Tabea Fiechter, a meteorologist with the weather office in Gander.

According to Newfoundland Power, there are 12,000 customers in the province without power because of severe weather and winds. 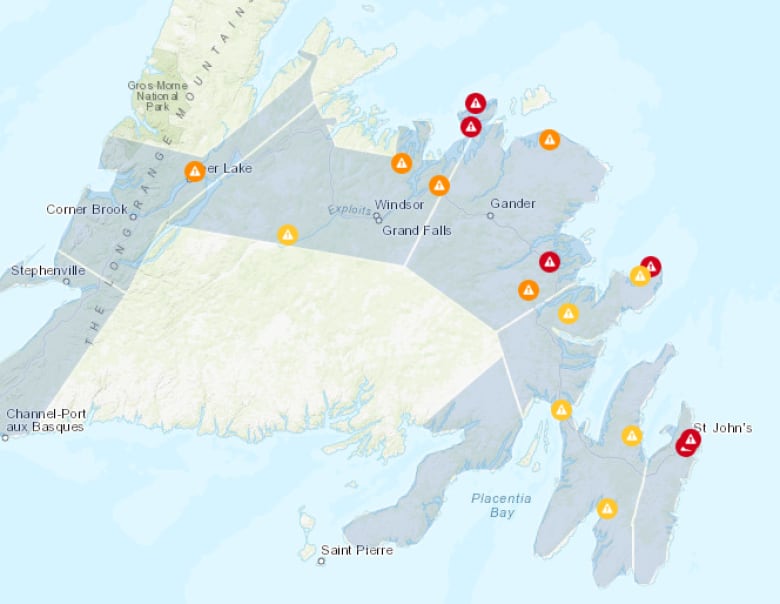 “It’s not just one or two trees, it’s seven trees, five trees. And as you get one tree removed the crews are finding that there are other trees that have come into line.”

Environment Canada has issued wind warnings for most of the Avalon, with storm surge warnings affecting the northeast and east coasts of the peninsula.

More exposed areas of the northeast Avalon coast like Bonavista and Twillingate are ducking under sustained winds of 100 km/h and gusts of 140 km/h, Fiechter said.

With that wind, nine-metre-high waves are pounding that coastline, she said.

“[There is] definitely potential for damage in those areas.”

Out in the Grand Banks, she said those waves are reaching 11 metres.

The Northern Peninsula and west coast of the island are under winter storm warnings.

Wind warnings have been issued for Makkovik and Rigolet, while the rest of the Labrador coast braces under winter storm warnings.

Many flights at the St. John’s International Airport, the Gander Airport and the Deer Lake airport are cancelled or delayed.

Marine Atlantic has cancelled its crossings for the day, and Labrador Marine says the Apollo ferry will likely stay tied up today as well.

For the latest updates on closures, delays and cancellations, check out our Newfoundland Storm Centre and our Labrador Storm Centre.

The west coast has seen a bit of snow, most notably in areas in higher elevations around Marble Mountain and Deer Lake, she said.

The concern is not the accumulation, which she said will be minimal, but the effects of the wind on that snow.

“It doesn’t take a lot of snow with this kind of wind to really reduce visibility,” she said.

There is a blowing snow advisory for Gander, and drivers in Twillingate and Bonavista will also have a tough time seeing the road ahead, she said.

Winds will start to die down Thursday afternoon in most areas, Fietcher said, but only slightly — those exposed areas along the northeast Avalon coast will still have gusts up to 110 km/h throughout the afternoon.

Throughout the night, she said, winds will stay gusting between 50 km/h and 80 km/h, and will then start slowing down.

Post Views: 415
Want To Change Your Life? Start Earning Up To $5,000 Per Week After Watching This Video. Click Here!
Related Topics:intenseLabradorNewfoundlandofficialsPlanetpoundingstorm
Up Next

Humans are having a huge influence on the evolution of species

Most intense storm on the planet pounding Newfoundland and Labrador, say officials

Post Views: 680
Want To Change Your Life? Start Earning Up To $5,000 Per Week After Watching This Video. Click Here!
Continue Reading

Post Views: 4,557
Want To Change Your Life? Start Earning Up To $5,000 Per Week After Watching This Video. Click Here!
Continue Reading

Post Views: 425
Want To Change Your Life? Start Earning Up To $5,000 Per Week After Watching This Video. Click Here!
Continue Reading