The brutal Saskatchewan windchill didn’t seem to bother the donkey and the horse as they picked away at a bale of hay on a small farm northwest of Regina.

You’d never know the pair had only lived together for a couple weeks, or that they saved each other’s lives.

Pam Johnson’s niece had packed up her horses and moved them to Ontario on Oct. 11. Festus, the 13-year-old standard donkey, was left all alone. He was devastated, Johnson said. Think of Eeyore, but in real life. 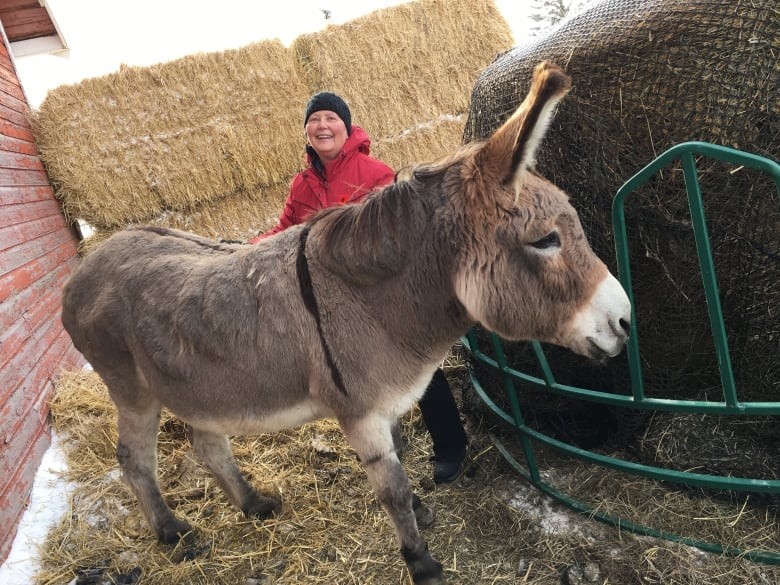 Johnson tried to find replacements for Festus’s equine friends, but had no luck.

Meanwhile, DeLee Grant was in White City praying she’d be able to find a home for her 24-year-old horse, Peggy. Grant and her husband Larry were downsizing from a farm to a home in town. They had two horses. One had to be euthanized because he was old, arthritic and in poor health, but Peggy was still very healthy.

Grant wasn’t willing to sell Peggy for fear of her ending up on a slaughter line. 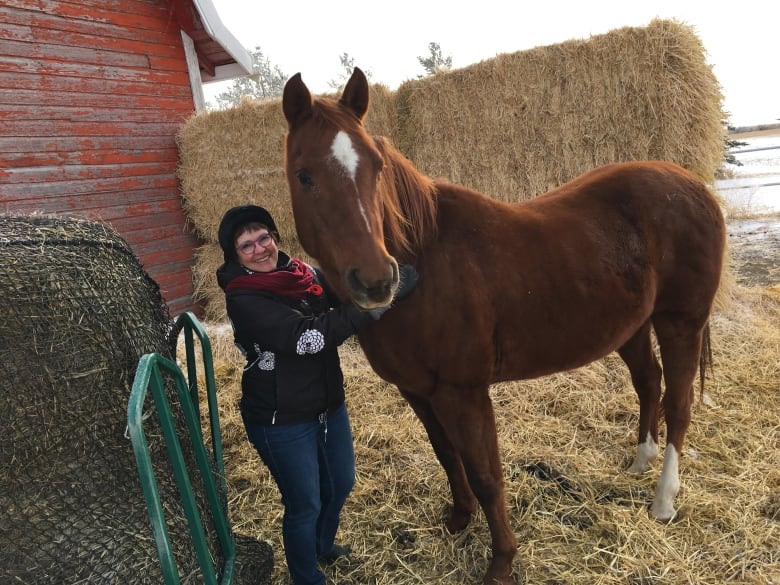 DeLee Grant was losing hope that she’s find a new home for her 24-year-old horse, Peggy. She had booked an appointment to euthanize Peggy when she met Pam Johnson. (Sam Maciag/CBC Saskatchewan)

Part of the downsizing for Grant included a big move. Grant ended up breaking a vertebrae in her back during the process and had to have surgery. After about a week she was feeling good enough to tag along with her husband into Regina one afternoon. They stopped at the Dollar Store and bumped into a woman named Yvonne Schalk.

The whole move has been very stressful and this is the happiest moment of my entire life to find a home for Peggy.– DeLee Grant

“I told her that I was feeling pretty bad because I was going to have to put my horse down,” Grant said.

Schalk told Grant about Johnson and Festus. Grant and Johnson emailed back and forth a few times. After a visit out to Johnson’s farm, Grant decided Peggy would come to live with Festus.

Peggy’s new home looks like something on a Christmas card. There’s a big red barn, lots of trees covered in snow and dogs that greet you at the gate. 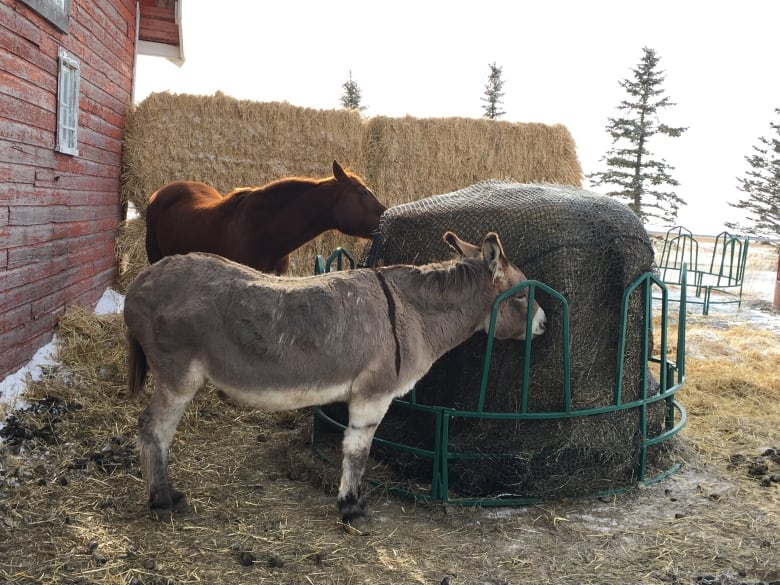 Peggy and Festus now live happily on a farm northwest of Regina. Festus is no longer depressed and Peggy was saved from being euthanized. (Sam Maciag/CBC Saskatchewan)

Peggy wasn’t so sure about her new home at first.

“Festus came around the barn and kind of looked at her,” Johnson said. “And she backed up because she had never seen a donkey before. And he said, you know ‘Hi, I’m a nice guy to know.’

“He’s quite a handsome brute. They sniffed, as animals do, and they’ve been together ever since.”

Pam Johnson and DeLee Grant were both struggling to save their animals — one from depression, one from being euthanized — when a mutual friend connected them. Now the two women and their animals have bonded. 0:38

Grant and Johnson have known each other less than a month, but both agree they’ve formed a strong bond.

“The whole move has been very stressful and this is the happiest moment of my entire life to find a home for Peggy,” Grant said.

Grant is already making plans to bring her granddaughter out to see Peggy at Christmas. Johnson likened the new friendship to a heartwarming Christmas story.

“She can still help me out with helping Festus out and he’s not lonely,” Johnson said. 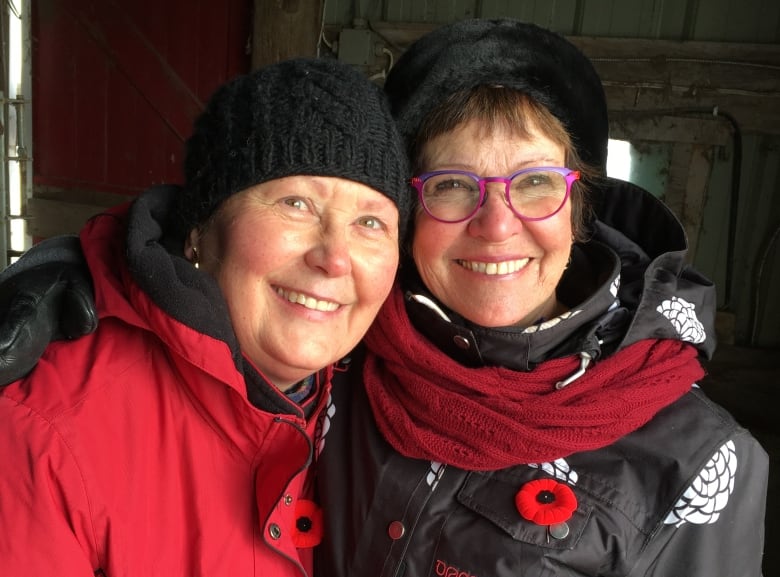 The two women hug and smile constantly as they feed the animals on Johnson’s farm, indulging Festus and Peggy’s shared love of oats.

“We have become very good friends through this and she’s always welcome here,” Johnson said.

Post Views: 465
Want To Change Your Life? Start Earning Up To $5,000 Per Week After Watching This Video. Click Here!
Related Topics:Depresseddonkeyfriendshiphappyheehawerhorse
Up Next

Hundreds of noisy, smelly sea lions fill Cowichan Bay â to the delight of many