Toronto’s Royal Ontario Museum announced plans on Wednesday to create a “Dawn of Life” gallery that will tell the story of the earliest life on Earth.

The Willner Madge Gallery, Dawn of Life, which would be the first of its kind in North America, will contain a collection of fossils from across Canada.

ROM officials say the gallery will feature fossils from such places as Burgess Shale in Yoho and Kootenay National Parks in B.C., Joggins Fossil Cliffs in N.S., Mistaken Point in Newfoundland, and Miguasha National Park in Quebec.

“This new gallery will invite the public to become time travellers and to discover where we all come from,” said Caron, who will oversee the creation of the gallery. 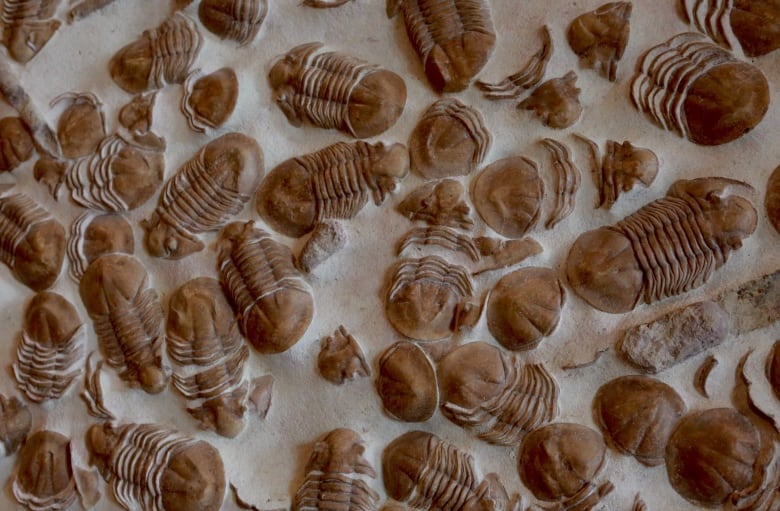 A fossil of trilobites known as Xenasaphus Devexus. This fossil, from 460 million years ago, was found in the area of the Volkhov River, St. Petersburg, Russia. (Tina Mackenzie/CBC)

According to the ROM, the permanent gallery will be 10,000-square feet in size and is being made possible through a donation of $5 million from Toronto philanthropists Jeff Willner and Stacey Madge. All funds are in now in place for the building of the gallery, which is funded entirely through the support of donors.

More than 100 people have donated money to support the gallery, with donations ranging from $10 to $5 million, the ROM said.

Construction is expected to begin in 2019 and the ROM hopes it will open in 2021.

The collection will trace the history of early life on Earth from nearly four billion years ago until dinosaurs appeared, Caron said at a news conference on Wednesday.

Caron said the museum will be guided by the principle of evolution in the gallery, which will combine hundreds of fossils, interactive displays, scientific discoveries, and new media technology. 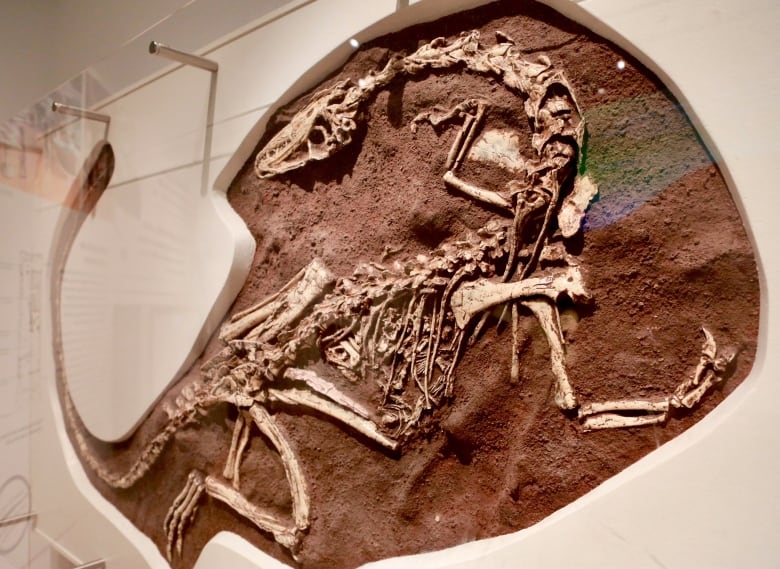 This cast of Coelophysis bauri, a theropod dinosaur, is one of the earliest known North American dinosaurs. Evidence of its last meal, a crocodilian, is preserved in its abdominal cavity. This dinosaur dates from the Late Triassic period, about 200 million years ago. The fossil is from New Mexico. (Tina Mackenzie/CBC)

The gallery will tell the story of four mass extinction events, he said. Some of these events wiped out 95 per cent of all species on Earth, he said.

“Telling the stories will provide way for the public to reflect on current issues, such as climate change and our ultimate survival on this planet,” he said.

“This family friendly gallery, which is scheduled to open in 2021, would be unique in the world and would become a key destination for many ROM visitors and visitors of this global city.”

More than half of the fossils will be from Canada, with nearly every province and territory represented, he added. It will display “national treasures,” he said.

In the release, the ROM said it makes sense for the gallery to be in Canada.

“As a leader in scientific research in early life paleontology, and home to one of the largest and most significant early life collections in the world, with many of the specimens originating from sites across Canada, the ROM is in a unique position to tell this story,” the museum said.

“This is both a global story about our shared history and an important Canadian story, as the history of life on earth can be found in the very landscape and rocks of Canada.”

The ROM said it will include its own early life collection, much of which has not been displayed before.

Gallery to ‘unlock the mysteries’ of the past

“This gallery is not only about the past, but also about the future, as the collection and associated research activities will contribute to ongoing scientific discoveries that will help us unlock the mysteries behind our distant beginnings and broaden our understanding of the world around us,” the release said.

“It’s a fascinating and perplexing story, and one the ROM is well equipped to tell.”

Post Views: 687
Want To Change Your Life? Start Earning Up To $5,000 Per Week After Watching This Video. Click Here!
Related Topics:DawnearliestearthGalleryLifeplansROMStory
Up Next

Post Views: 271
Want To Change Your Life? Start Earning Up To $5,000 Per Week After Watching This Video. Click Here!
Continue Reading

Post Views: 2,676
Want To Change Your Life? Start Earning Up To $5,000 Per Week After Watching This Video. Click Here!
Continue Reading