Forty years after researchers from Halifax helped drill a hole nearly two kilometres into the ground in rural Iceland, locals still remember the project, not so much for its geological findings, but for the spout of hot water it unexpectedly unleashed — and the midnight hot tub parties it brought to their isolated fishing village.

In 1978, a group of students and researchers from Dalhousie, led by now-retired professor James Hall, travelled to Reydarfjordur in eastern Iceland to spearhead an international mission to understand the geology of the ocean’s crust.

Marcos Zentilli was a young professor at Dal when the megaproject, funded by institutions in Canada, Germany, Denmark and Iceland, got underway.

Zentilli said back then, the idea that the ocean floor is spreading and that continents move around — in other words, the theory of plate tectonics — was still gaining acceptance, and “not everybody believed it. It was a little bit like global warming today.” 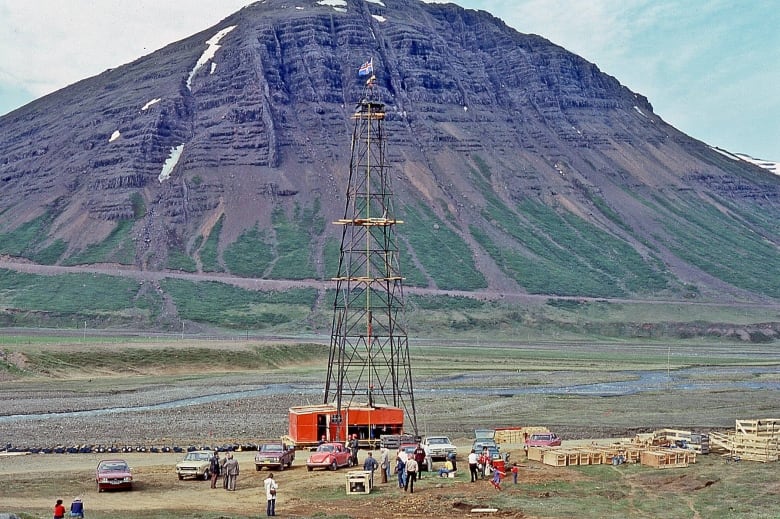 The hole was drilled to a depth of about 1.9 kilometres. (Submitted by Johann Helgason)

Researchers had tried to drill into the ocean floor from ships, but that proved expensive and there were lots of failures. Drilling from islands was seen as a cheaper alternative.

After erecting a huge tower, the team managed to drill the hole 15 to 20 metres deeper every day. Amid June snow flurries, researchers like Zentilli were tasked with describing, measuring and boxing all the cylinders of rock extracted from the hole.

“It was a lot of work,” Zentilli recalled in a recent interview.

Then, something went wrong. At 1919.73 metres, the drill would go no further.

“We got stuck,” Zentilli said. “They decided that we were not getting the results we had expected … and then they decided to stop.”

But something also went right. Warm water started spurting out of the hole.

If there’s one thing to know about Icelanders, it’s that they love their warm water. 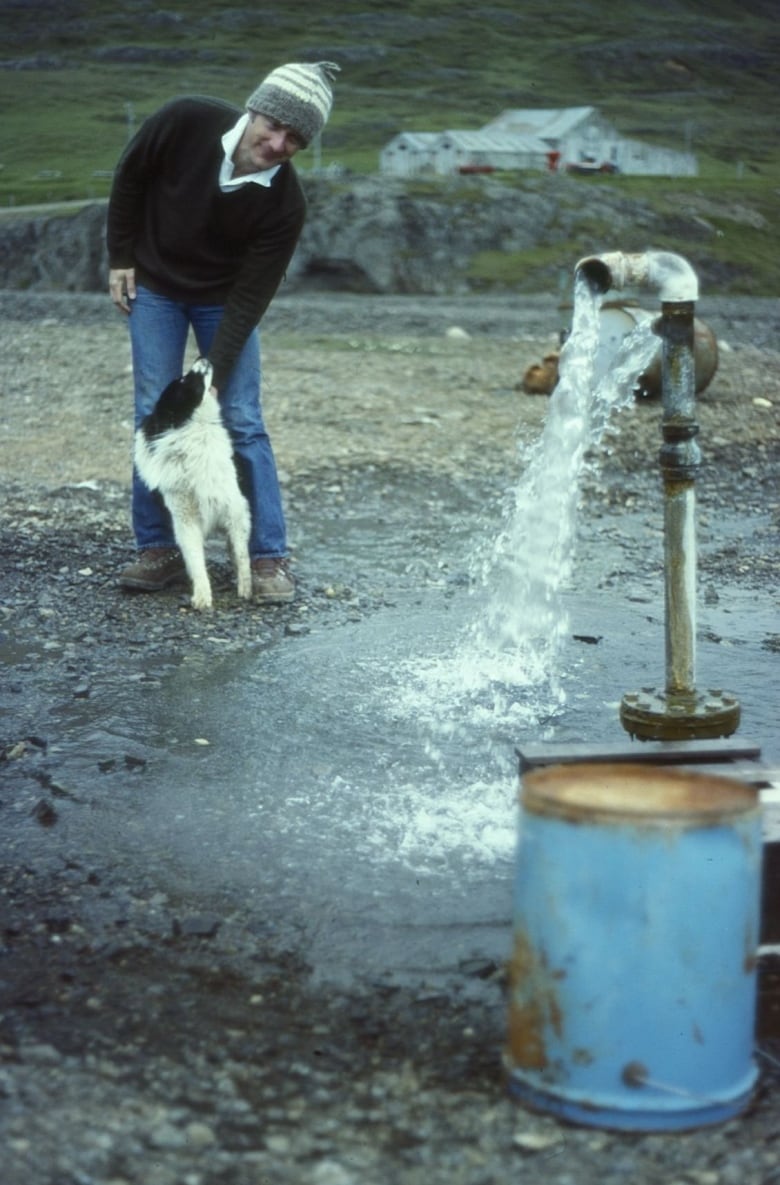 Dalhousie University professor emeritus Marcos Zentilli travelled to Iceland in 1978 to work on the project, which unexpectedly brought hot water to the Earth’s surface. (Submitted by Johann Helgason)

Samuel Sigurdsson runs the Olis gas station in Reydarfjordur, and while he didn’t live there in 1978, he said tales of the hot spring abound to this day.

Locals in the village of just a few hundred hauled a large, stainless steel tub from a nearby cheese factory and placed it under the spout.

“It was very popular,” said Sigurdsson. “It was just like a small swimming pool. You can imagine how nice it was, from the dark winter cold night after a beer in the pub, to go there.”

The communal hot tub was big enough to fit 10 or 15 people, he said. But two people was all it took to produce at least one unanticipated byproduct of the drilling project.

“As the story says, there was a few babies made there,” Sigurdsson said. “I was not there myself, but the story tells that that is the reason for many kids who was made there.” 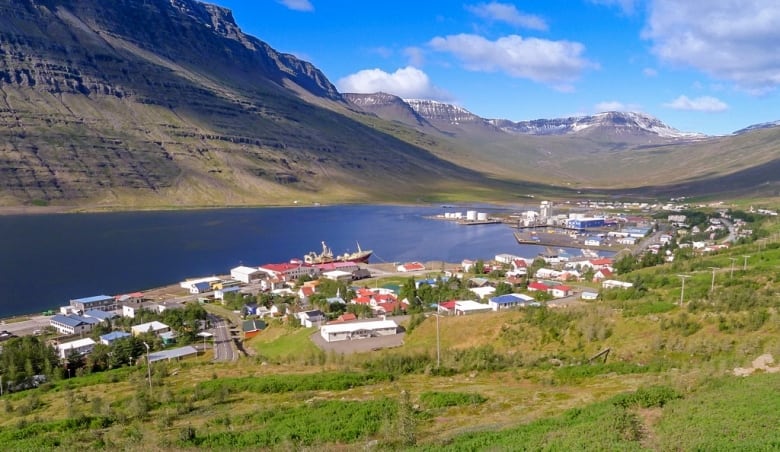 After the project’s discovery of geothermal energy in the area, holes were drilled in the nearby town of Eskifjordur, Iceland. Buildings in that community are now heated with geothermal energy. (Submitted by Johann Helgason)

Johann Helgason was involved in the drilling project and now works for the National Land Survey of Iceland.

He said the discovery of the hot spring in Reydarfjordur was significant because the area wasn’t previously believed to have much geothermal potential.

But after the project wound up, drilling in nearby Eskifjordur revealed enough geothermal energy to heat the entire village.

“For us in Iceland, the finding had economic value,” Helgason said. “Having hot water is equivalent to finding an oil well in a sense except it’s much purer.” 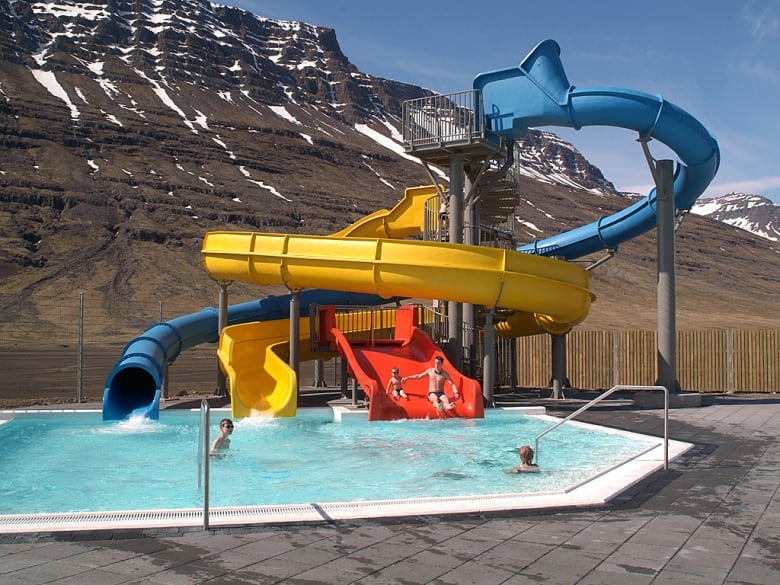 This pool in Eskifjordur is heated with geothermal energy. (Submitted by Johann Helgason)

As for the original hole, Zentilli made a trip back to Iceland last year for the first time since the 1970s and went on a pilgrimage of sorts to find that epic fountain.

“I was walking around and suddenly a farmer was fixing a fence and found it very strange having this tourist looking around his farm and he came and he says, ‘Can I help you?'” Zentilli said.

Once Zentilli explained what he was looking for, the farmer was determined to show him the hole, buried beneath a metre and a half of gravel and now connected to pipes that heat all the farm’s buildings. 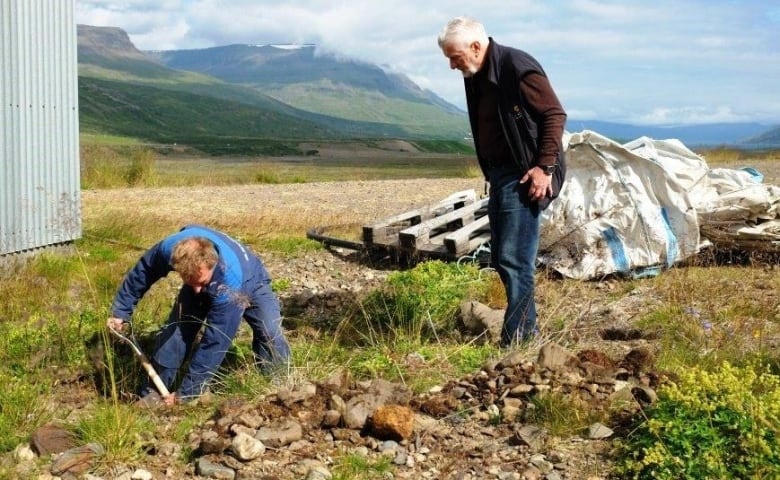 The man spent about an hour and a half digging and eventually uncovered the legendary hole in the ground.

It’s unlikely the Icelandic farmer would be willing to shovel all that gravel away for just anyone, but tourists interested in the drill project can go and see for themselves the cylinders of rock that were extracted 40 years ago.

Initially shipped to Halifax, they were later returned to Iceland and are now stored in a museum in Breiddalsvik.

A geologist with the Icelandic Institute of Natural History said while the rocks have generated a lot of interest among geologists, in general, “drill cores are not something people seek to see.” 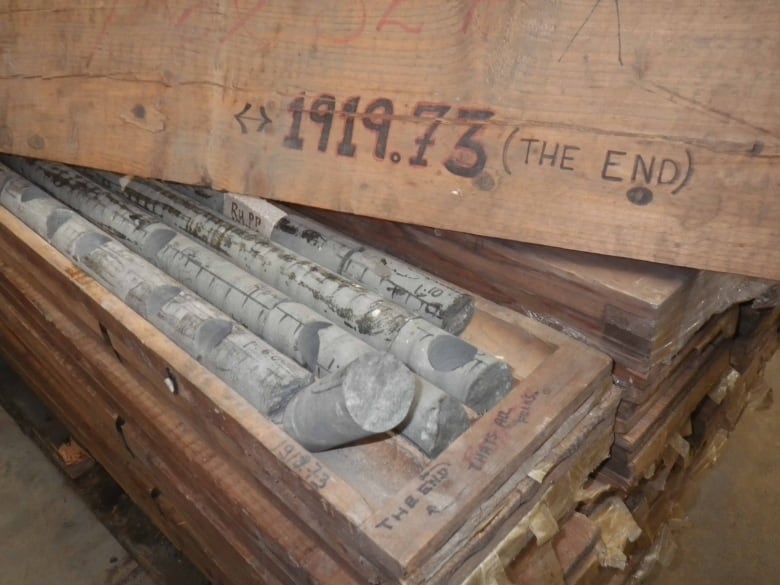 Rock extracted from the end of the drill hole, at 1919.73 metres deep. (Hrafnkell Hannesson)

Post Views: 433
Want To Change Your Life? Start Earning Up To $5,000 Per Week After Watching This Video. Click Here!
Related Topics:babyboomCanadiansdrilledholeIcelandledrural
Up Next

Google, Alphabet and the fight over a controversial smart city in Toronto

California wildfires could become ‘explosive’ due to windy conditions

Post Views: 661
Want To Change Your Life? Start Earning Up To $5,000 Per Week After Watching This Video. Click Here!
Continue Reading

Post Views: 4,478
Want To Change Your Life? Start Earning Up To $5,000 Per Week After Watching This Video. Click Here!
Continue Reading

Post Views: 415
Want To Change Your Life? Start Earning Up To $5,000 Per Week After Watching This Video. Click Here!
Continue Reading