The legal cannabis industry got a shot in the arm on Wednesday as U.S. voters in three of the four states deciding to legalize the drug in some way opted to approve those ballot initiatives.

While much of the attention from Tuesday evening’s midterm election focused on the balance of power in Congress, investors were instead focusing on ballot initiatives to legalize recreational marijuana in Michigan and North Dakota, while allowing the drug for medical use in Utah and Missouri.

Both of the medical initiatives passed, as did Michigan’s but voters in North Dakota decided to reject its recreational marijuana use. But the three other states going ahead mean that 33 U.S. states plus the District of Columbia currently allow for legal marijuana use under some circumstances — either medically or recreationally. 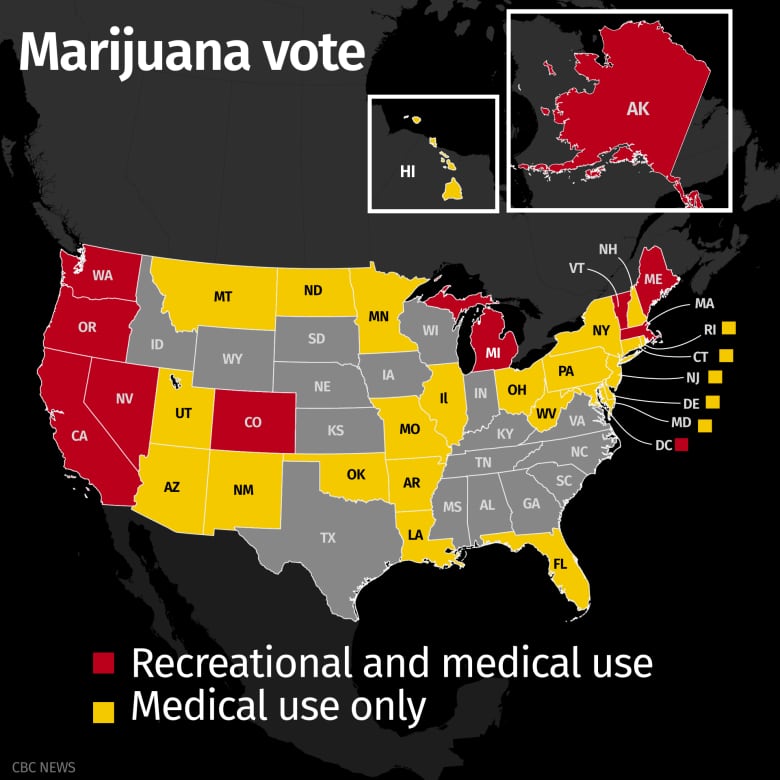 33 U.S states plus the District of Columbia have now legalized marijuana in some form. (Scott Galley)

“Marijuana has now been legalized for adult use in one out of every five states, so I think it’s safe to say federal laws are in need of an update,” said Matthew Schweich, deputy director of the Marijuana Policy Project advocacy group.

Investors clearly thought the same thing, as shares in Canopy Growth Corp, Aurora Cannabis Inc., Aphria Inc. and Tilray Inc. all rose on the news Wednesday before giving up some of their gains later in the day. Shares in all four companies were also higher on Tuesday in anticipation of the pro-cannabis laws going ahead.

Analyst David Kideckel at Altacorp Capital, who covers cannabis companies, viewed Tuesday’s results as mildly positive for the sector as a whole.

“We see these states’ push towards some form of cannabis legalization, whether recreational or medical, as one further catalyst towards U.S. policy change at a federal level, which we expect to happen over time.”

The Democrats taking control of the House is also broadly supportive of marijuana over the long term, but likely not enough to lead to any firm steps on the federal level as long as the status quo persists.

“We view this as a positive catalyst for the cannabis sector,” he said.

Chris Damas, editor of investment newsletter the BCMI Report, says while he still thinks some of the big Canadian names listed above are overhyped, he has been advising clients to move money into some of the smaller U.S. companies with presences in multiple states

Michigan opting for recreational weed was significant because of its large population, but ballot measures in North Dakota and Missouri were less important.

Utah opting for medical weed, however, was of note simply because it shares a border with Colorado, the U.S. state where the cannabis sector is flourishing the most.

“I believe Colorado’s huge cannabis growth has been in part because it has been an island surrounded by prohibitionist states,” he said.

He says the Democrats taking control of the House of Representatives is a positive sign for cannabis over the long term, but he says it’s not a given that legal pot in the U.S. would be a boon for Canadian companies like the ones listed above.

Instead, he thinks some of the lesser U.S. companies have the most to gain. “The U.S. players will soon have as much market capitalization as the Canadian companies or more,” he said. “These are Barbarians at the cannabis gate in my view,” adding that he thinks it’s more likely in the long run that U.S. cannabis names will one day try to take over the big Canadian players than the opposite happening.

“Do the Canadian operators risk missing the train in U.S. federally legal cannabis the longer it is delayed?” Damas said. “I would say, yes.”

Post Views: 354
Want To Change Your Life? Start Earning Up To $5,000 Per Week After Watching This Video. Click Here!
Related Topics:buoysCanadiancannabiscompaniesFormlegalizepotstatesvoting
Up Next

CEO of outdoor retailer Mountain Equipment Co-op to step down