After years of delay, including lengthy court battles and passionate protests from those willing to be arrested for blocking construction crews, builders of a giant telescope plan to move forward with constructing the $1.4 billion instrument on a Hawaii mountain that is considered sacred.

The state Supreme Court’s 4–1 ruling upholding the project’s construction permit Tuesday is a victory for the contentious Thirty Meter Telescope — a collaboration between Canada, the U.S., Japan, China and India — planned for Hawaii’s tallest mountain, Mauna Kea. Opponents say the telescope will desecrate sacred land on the Big Island. Supporters say it will bring educational and economic opportunities to the state.

Further legal action is still possible, state Attorney General Russell Suzuki said. There can be a motion for reconsideration filed within 10 days and following that, a request can be made to the U.S. Supreme Court to review the decision, he said.

Kealoha Pisciotta, one of the main leaders against the telescope, said she’s doesn’t know what their next steps will be, but she’s not hopeful that more legal wrangling will help.

Learn about Canada’s involvement in the Thirty Meter Telescope.

Opponents and supporters have been awaiting the ruling because it was expected to help determine whether the project is built in Hawaii or moves to a backup location in Spain’s Canary Islands that is less desirable to scientists hoping to use the instrument for groundbreaking discoveries.

Henry Yang, chair of the TMT International Observatory Board of Governors, said in a statement they are grateful the ruling will allow the telescope to be built on Mauna Kea.

Gov. David Ige, who said he is pleased with the ruling, vowed to protect rights of protesters and telescope builders. “The court’s decision will allow Hawaii to continue to lead the world in astronomy,” Ige said.

Plans for the project date to 2009, when scientists selected Mauna Kea after a five-year, around-the-world campaign to find the ideal site.

The project won a series of approvals from Hawaii, including a permit to build on conservation land in 2011.

Protests disrupted a groundbreaking and Hawaiian blessing ceremony at the site in 2014. After that, the protests intensified. 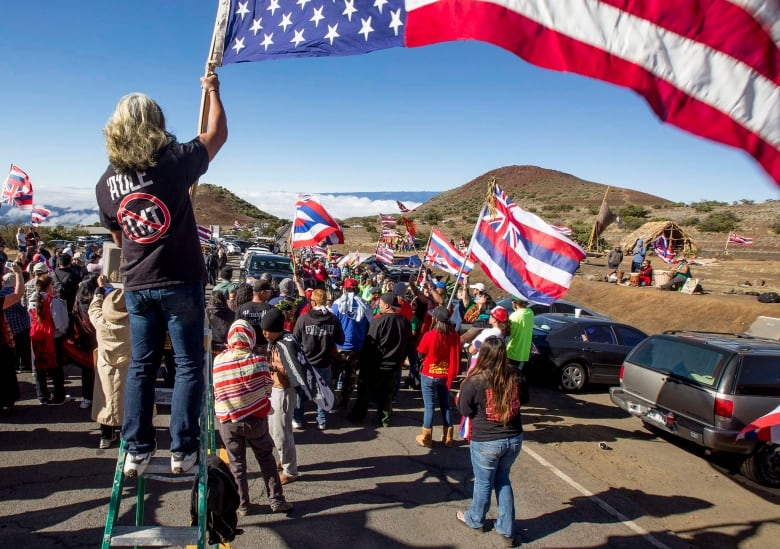 In this June 24, 2015 file photo, Thirty Meter Telescope protesters walk on a road during a blockade that prevented TMT construction vehicles from driving up to the summit of Mauna Kea near Hilo on the island of Hawaii in Hawaii. (Holly Johnson/Associated Press)

Construction stopped in April 2015 after 31 protesters were arrested for blocking the work. A second attempt to restart construction a few months later ended with more arrests and crews retreating when they encountered large boulders in the road.

Scientists revere the mountain for its summit above the clouds that provides a clear view of the sky with very little air and light pollution.

The telescope will allow astronomers to reach back 13 billion years to answer fundamental questions about the advent of the universe, touts a website for the project.

In December 2015, the state Supreme Court revoked the permit, ruling the land board’s approval process was flawed. That meant the application process needed to be redone, requiring a new hearing.

After oftentimes emotional testimony for the hearing that spanned 44 days, the retired judge presiding over the proceeding recommended granting the permit.

Opponents appealed again after the land board approved the permit. They complained about various due process issues, including that the hearings officer had a conflict of interest because she was a member of a Big Island astronomy centre.

The connection was “too attenuated,” and membership doesn’t lead to supporting the telescope, Tuesday’s Supreme Court ruling said.

A group of universities in California and Canada make up the telescope company, with partners from China, India and Japan. The instrument’s primary mirror would measure 30 metres in diameter. Compared with the largest existing visible-light telescope in the world, it would be three times as wide, with nine times more area.

Telescope parts have been built in California and partner countries while construction on Mauna Kea was halted.

Reactions to the ruling from two Native Hawaiians showed how the issue has divided the community.

Telescope opponent Kahookahi Kanuha, who was arrested twice for blocking construction, said Hawaiians need to be ready to resist construction with non-violent protests. He had a message for them: “Hoomakaukau,” get ready.

Richard Ha, a Native Hawaiian farmer who supports the telescope, said the long process that led to the ruling was “pono,” or righteous. He said he wants to sit down with opponents, “talk story” and find common ground.

Post Views: 382
Want To Change Your Life? Start Earning Up To $5,000 Per Week After Watching This Video. Click Here!
Related Topics:controversialCourtgoaheadHawaiiMeterSupremetelescope
Up Next

Milky Way was part of cosmic collision 10 billion years ago