It started out modestly enough: David Hertz, having learned that under the right conditions you really can make your own water out of thin air, put a little contraption on the roof of his office and began cranking out free bottles of water for anyone who wanted one.

Soon he and his wife, Laura Doss-Hertz, were thinking bigger — so much so that this week the couple from California won the $1.5 million US XPrize For Water Abundance. They prevailed by developing a system that uses shipping containers, wood chips and other detritus to produce as much as 528 gallons (2,000 litres) of water a day at a cost of no more than 2 cents US a litre.

The XPrize competition, created by a group of philanthropists, entrepreneurs and others, has awarded more than $140 million US over the years for what it calls audacious futuristic ideas aimed at protecting and improving the planet. The first XPrize, for $10 million US, went to Microsoft co-founder Paul Allen and aviation pioneer Burt Rutan in 2004 for SpaceShipOne, the first privately financed manned space flight.

So when Hertz learned a couple of years ago that a prize was about to be offered to whoever could come up with a cheap, innovative way to produce clean fresh water for a world that doesn’t have enough of it, he decided to go all in.

At the time, his little water-making machine was cranking out 568 litres a day, much of which was being given to homeless people living in an around the alley behind the Studio of Environmental Architecture, Hertz’s Venice Beach-area firm that specializes in creating green buildings. 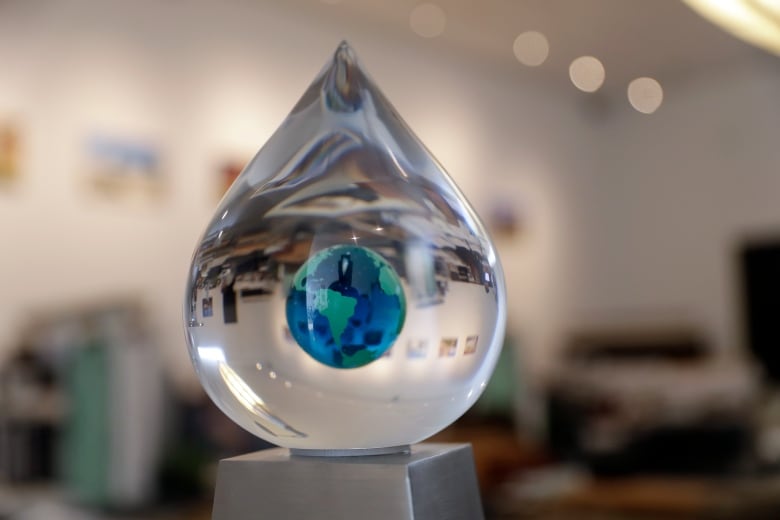 He and his wife, a commercial photographer, and their partner Richard Groden, who created the smaller machine, assembled The Skysource/Skywater Alliance and went to work. They settled on creating little rainstorms inside shipping containers by heating up wood chips to produce the temperature and humidity needed to draw water from the air and the wood itself.

“One of the fascinating things about shipping containers is that more are imported than exported, so there’s generally a surplus,” says Hertz, adding they’re cheap and easy to move around. And if you don’t have wood chips to heat them with, coconut husks, rice, walnut shells, grass clippings or just about any other such waste product will do just fine.

“Certainly in regions where you have a lot of biomass this is going to be a very simple technology to deploy,” said Matthew Stuber, a professor of chemical and biomolecular engineering at the University of Connecticut and expert on water systems who was one of the panel’s judges.

He called their water-making machine a “really cool” merging of rather simple technologies that can be used to quickly deliver water to regions hit by natural disasters, stricken by drought or even rural areas with a shortage of clean water.

Hertz and his wife are just starting to contemplate how to accomplish that.

Theirs was among 98 teams from 27 countries who entered. Many teams were bigger and better funded while the couple mortgaged their Malibu home to stay in the game. At one point, they were told they hadn’t made the final round of five but then one team that did dropped out and they were back in. 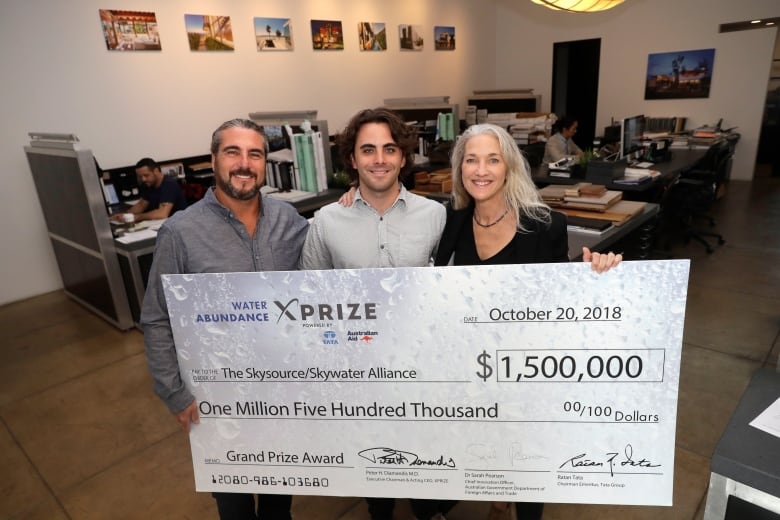 David Hertz, left, his wife Laura Doss-Hertz, right, and project designer Willem Swart pose for a photo with an image of a $1.5 million prize. There are no restrictions on how the money can be used, but Hertz says the couple has committed to the ‘development and deployment of these machines, to get them to people who need the water most.’ (Marcio Jose Sanchez/Associated Press)

“If you say we were the dark horse in the race, we weren’t even in the race,” Hertz recalled with a smile. He stood near a giant copy of the check in his office while his wife prepared to leave for a photo shoot and a visitor sampled a glass of their freshly made water.

Now, though, they are in for the long, wet haul.

“There’s no restrictions whatsoever on how it’s used,” Hertz said of the prize money. “But Laura and I have committed to using it all for the development and deployment of these machines, to get them to people who need the water most.”

Post Views: 327
Want To Change Your Life? Start Earning Up To $5,000 Per Week After Watching This Video. Click Here!
Related Topics:CoupleMakingmillionwaterwinsXPrize
Up Next

Post Views: 276
Want To Change Your Life? Start Earning Up To $5,000 Per Week After Watching This Video. Click Here!
Continue Reading

Post Views: 2,780
Want To Change Your Life? Start Earning Up To $5,000 Per Week After Watching This Video. Click Here!
Continue Reading

Post Views: 210
Want To Change Your Life? Start Earning Up To $5,000 Per Week After Watching This Video. Click Here!
Continue Reading